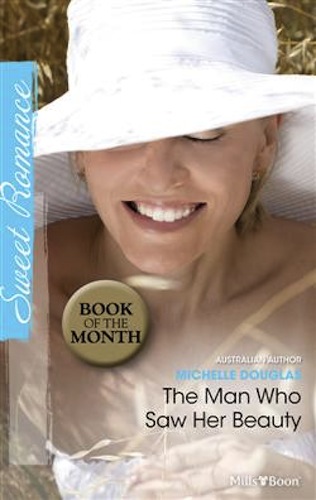 Review of: The Man Who Saw Her Beauty

If characters recovering from cancer aren't a trigger for you, then this is an enjoyable romance with a slow build and a lot of lovely moments in between. If characters recovering from cancer aren’t a trigger for you, then this is an enjoyable romance with a slow build and a lot of lovely moments in between.

It’s rare to find a story where the heroine looking at herself in the mirror and describing what she looks like actually has a purpose. (I know you’re already thinking of ditching this post after that, but stay with me.) Blair Macintyre is recovering from breast cancer treatment and she’s sick of people treating her as, well, the poor woman with breast cancer. Her strategy: bluffing.

One of Blair’s key strategies is to look normal—thus, the need to spend time in front of the mirror, applying make-up, putting on false eyelashes, and ensuring her wig is on properly:

The scenes with the mirror serve a double purpose, because by turning away from it as she puts on her prosthesis, Blair shows that she doesn’t actually feel normal and whole.

Blair is recuperating with her aunt Glory back in her old hometown of Dungog. Part of Blair’s strategy of acting normal is to allay Glory’s fears so that Blair can go back to Sydney without worrying her aunt—or causing her to sell up and move to the city. Blair volunteers to mentor teenage girls who have entered the Miss Showgirl beauty pageant, which Blair won 20 years ago, kickstarting her modelling career.

When she overhears one of the girls, Stevie, being denigrated by some of her peers for not being pretty enough, Blair comes to her defence and provides encouragement. But Stevie’s father, Nick Conway, isn’t impressed. Stevie’s mum, Sonya, had basically abandoned them to pursue a modelling career and things had ended badly for her. To make matters worse, Sonya had held Blair up as a career role model, so when he sees Blair’s perfectly groomed and composed facade and learns that she provided encouragement to Stevie, he’s not impressed. Turned on, yes, but not impressed.

This story continually surprised me, from the opening line when the heroine looks at herself in the mirror, to the way in which Blair and Nick hit each other’s sore spots but rise to the occasion and act like reasonable adults. Australian author Michelle Douglas teeters on the brink of cliche many times, but pulls it back just in time to thwart my expectations. There are plenty of romantic, angsty moments between Blair and Nick, and their backstories are incorporated into the story reasonably well. They both have personal baggage to work through, and the other serves as a catalyst for that process.

What I love about Nick is that he seems like a genuinely good man who recognises his own weaknesses and respects Blair’s autonomy over her own decisions even when he doesn’t agree with them. He’s gutted when he learns that his attempts to get Stevie to withdraw from the pageant is translated by his daughter to mean that he doesn’t think she’s pretty enough to be in the contest, and he apologises to Blair. A hero who apologises, and not just once!

Once Nick and Blair are on friendlier terms, their banter is amusing and charming. Their relationship develops slowly—there are a lot of issues to sort out—although there’s still the obligatory inappropriate mental lusting from the moment they meet. (It’s category romance—you can’t delay that stuff when you only have so many pages!) These issues are real-life stuff—dealing with cancer, dealing with insecurities resulting from previous relationships, and finding a way to fit your life with someone who has their own issues to work through.

Sweet Romance isn’t a Mills and Boon line that I frequently pick up, because the style of writing in this line isn’t usually to my taste. Douglas still veers into sentimentality at times, and in certain places, particularly towards the end, the writing has that strange cadence that I often find in category romance—dialogue that sounds like narrative, narrative that sounds like dialogue, and a kind of stream of consciousness narration of the hero or heroine’s thoughts as they speed through their cathartic moments—but they don’t dominate the story nor detract from the other gentler, more layered aspects of the characters’ development.

If characters recovering from cancer aren’t a trigger for you, and if you’re not bothered by the stylistic peculiarities of category romance, then this is an enjoyable romance with a slow build and a lot of lovely moments in between. Nick and Blair feel like friends as well as would-be lovers, and by the time they get their happy ending, I’m confident that their love is more than capable of weathering any storm. Tissues might be a good idea.

Who might enjoy it: Romance readers looking for believable conflicts

Who might not enjoy it: Readers who prefer not to read about cancer

A copy of this book was generously given to me by the author. This title is published under Mills & Boon Sweet Romance in Australia, Mills & Boon Cherish in the UK, and Harlequin Romance in the USA.