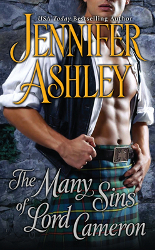 A Victorian romance that doesn’t pull a fast one on the reader. It’s a shame we get only one book a year in this series.

Lord Cameron Mackenzie has been a bachelor ever since his psycho first wife died and has raised his son with the help of his brothers and the women who have married into their family. He’s known for his talent with training race horses, and, of course, for his reputation with women.

Ainsley Douglas is a widowed lady-in-waiting to Queen Victoria (yes, it’s not a Regency!) and a good friend of one of the Mackenzie wives’. She’s been sent to their house party to retrieve incriminating letters that are being used to blackmail the queen. She’s encountered Cameron before—in smouldering but unfulfilled circumstances—and finds herself caught up with him again in her attempt to retrieve the letters.

Cameron is the third brother to feature in Jennifer Ashley’s lovely series featuring the scandalous Mackenzie family. Like the previous book featuring Cameron’s brother, Ian, this is not entirely a conventional romance novel. Both Ainsley and Cameron were married before, but while she was married to a kind man to avoid scandal, he was married to a psycho nymphomaniac who ended up causing scandal. His wife’s death is a bit of a mystery in the beginning, but it’s explained rather quickly—none of this dragged-on Jane Eyresque mysteriousness typical in other books.

The theme of the series appears to be about healing—everyone saves themselves and each other from drowning in their own hang-ups or traumas. The Mackenzies are a strong, proud and scandalous family, deeply affected by the abuse they suffered at the hands of their psycho dad, and they’ve come out better for it. Yes, they’re in need of love, and sometimes saving from themselves, but they’re believable, sympathetic characters, not the kind who act like arseholes, and then we’re just supposed to forgive them and let them be redeemed because we feel sorry for them as they had crap childhoods, evil women treated them badly, etc.

The family dynamics between the siblings and their wives is also lovely, which is as it should be because it sets up the rest of the characters for the series!

I liked both Ainsley, for her quiet kind of strength and hidden cheekiness, and Cameron, for his stubborn kindness and the way he grew as a character. I have yet to read a book in this series that I didn’t love—they’re all keepers for me. Ainsley and Cameron’s romance is unconventional for the prudish Victorian age, and I liked how this was played out.

Ashley does not pull any fast ones on you. The Mackenzies don’t have everyone on their side, the Queen doesn’t like them, society loves them—the title’s a dukedom—but thinks they’re crazy, mamas don’t entirely throw their daughters at them, and in the end, it’s still like that. There’s no magic fix. The road to redemption is there, they get their happy endings, but you get to appreciate the entire journey.

I highly recommend the entire Highland Pleasures series. You can read this one on its own, but it would be better if you read them all in order. I look forward to the next book, and it is a shame that they only come out once a year!