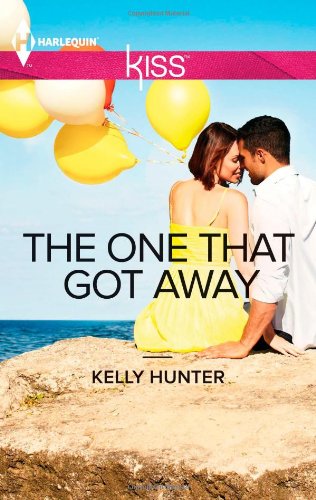 Review of: The One That Got Away Evie Jones and her business partner, Max, need additional funding for a project that could make their careers. When they attempt to enter a marriage of convenience in order to gain access to Max’s trust fund, they’re faced with a very big inconvenience—Max’s brother and Evie’s ex-lover. Eleven years ago, Evie and Logan had a week-long affair that ended in heartbreak. The sex was too rough, she was too inexperienced, and they were both too consumed by passion to take care of themselves and each other.

There’s no denying the chemistry that still exists between Evie and Logan. Logan wants nothing to do with her—his memory of their affair is steeped in shame and self-loathing. Evie knows that they’re different people now. She’s had eleven years to come to terms with the affair, and to understand her needs and boundaries. Evie is convinced there could be a way for them to find happiness together, but to do that she will have to convince Logan to give their relationship another chance.

This book, one of the launch titles for Harlequin’s new KISS line, is my first keeper for the year. Kelly Hunter is my Melina Marchetta equivalent in romance fiction, and I get the same thrill reading her books as I do Marchetta’s. They don’t have the same style, they don’t write about the same things, and they’re not even in the same genre, but they convey so much in so few words and their characters stay in my mind long after I’ve turned the last page.

The One That Got Away sets a very high standard for the KISS line, but I do wonder if this book will be typical of the line. According to Harlequin’s writing guidelines, KISS is ‘all about the 21st century alpha male (sic) hero’ and features heroines ‘in control of their own destinies’ and heroes ‘who expect their partners to be their equals’. This book certainly fulfils those criteria, but the tone is brooding rather than flirty or cheeky. There’s plenty of humour between the characters, particularly when Max is around, but it doesn’t approach rom com by any means.

From the opening chapter, there’s a sense of foreboding and heartache that really doesn’t let up until the very end. When Max finds out about Evie and Logan’s past relationship, I knew this book would be something special because Hunter continually tosses my assumptions—hey, it’s category romance, right?—in my face. It’s a beautiful thing.

Hunter makes use of familiar tropes—the wealthy to the point of untouchable hero being the most obvious—yet her characters are complex and unpredictable. Logan is richer than Midas, Max is a trust fund baby, and Evie has accumulated her own wealth, but the characters poke fun at themselves and each other, recognising how fortunate they are without overcompensating by pretending the money isn’t there or that they don’t enjoy it. There’s no room for ingenues or co-dependency in this story—adults act like adults and manage their own internal conflicts, which is particularly important for Evie and Logan.

Few books make me want to take the heroine’s place as well as to be the heroine; this book does that. Readers who love a strong hero won’t be disappointed—Logan is possessive, tortured and physical—but it’s Evie who is at the heart of the story. Because Logan is unable or unwilling to face his emotions, it’s through Evie that the reader comes to understand what drives him and, ultimately, what heals him.

The biggest frustration I had with the story is the frequent references to Logan being dominant and Evie being submissive. This is the crux of why their affair ended years ago, but it became repetitive as the story went on. I was hoping to use this book as a romance conversion book for readers who love Fifty Shades of Grey, but for all the allusion to the Really Bad Thing That Happened Eleven Years Ago, the (present day) sex scenes are lyrical and romantic rather than rough and dirty. They never quite reach the intensity that Evie and Logan continually hint at. The story would have been much more compelling if the sex scenes had been edgier and had demonstrated how risky their behaviour could have been when they lacked control all those years ago. Without that context of how far Logan and Evie push the boundaries, some readers will find it difficult to forgive Logan for Evie’s injury all those years ago.

There also seems to be something missing from Logan’s character arc. Logan sees his dominant side as a kind of pathological behaviour resulting from having been a battered child. He doesn’t quite reach the point of embracing his kink, and there were missed opportunities for Hunter to show that even if Logan’s past had influenced his sexual preference somehow, it doesn’t mean that he can’t still enjoy sexual domination in a healthy way.

That aside, I loved everything else about the story. It’s always exciting to read a story set in Australia, but even more so when the story flits to and from Sydney, Melbourne, Perth and London as befits Logan’s business tycoon lifestyle. Hunter is always great at managing these transitions while keeping them in the background of the story. I particularly love Hunter’s ability to incorporate the realities of working life into her characters’ movements without adversely affecting the pace or plot of the story.

Although Max is a secondary character, he’s almost as important to the story as Evie and Logan, and Hunter manages to find enough space in the book to begin a romantic sideplot for Max. I’d love to see this explored more fully, even if it’s only in a novella…

…because let’s be honest: I can’t see Harlequin publishing an m/m romance in any of its category lines any time soon.

Finally, I couldn’t pick a section to quote. You can open the book to any page and read it and know that I loved that bit.

This is a beautifully written, subtle, angsty story that, for me, cements Kelly Hunter as one of the best writers of modern category romance. It’s my first keeper for the year.

Who might enjoy it: Readers with a penchant for tortured heroes

An advanced reading copy of this book was generously provided by the author.

Title: The One That Got Away (excerpt)
Author: Kelly Hunter
Publisher: Harlequin KISS