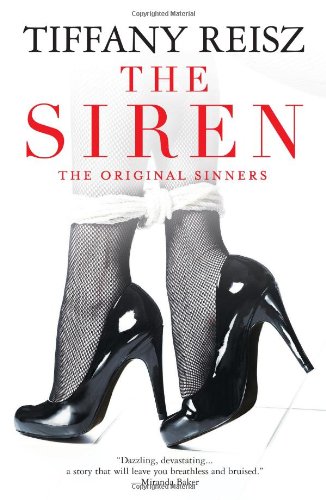 Everything about The Siren is deliciously complicated and it’s an experience I don’t want to spoil (plus I’m not in the habit of killing fairies, so to speak).

“I like doing things that hurt.” She gave him a Cheshire cat grin.

Nora pretty much introduced herself as one of my new favourite literary heroines of all time. Full of contradictions, she epitomizes female sexuality and is so wonderfully glib about all things sex that it’s both amusing and horrifying. Not to mention exciting. No wonder she’s considered dangerous. The banter between Nora and [insert any character she comes into contact with in the novel here] is fantastic, and her chemistry with all the men in her life is palpable.

There’s her editor, the tall, dark and handsome Zach, the mysterious former lover Zoren (who Alexander Skarsgard must have been the inspiration for, I just know it) and Southern gentleman Wesley. We get only glimpses of Kingsley, Nora’s friend slash ’employer’ and reluctant connection to Zoren, but he’s sure to feature in the following books. I should mention here that all these men have sexy accents. (An Englishman, an American, a Frenchman walk into a bar…)

Waiting for the next two instalments (The Angel and The Prince) is agonising, but I’m sure Reisz would make the wait worthwhile.

Who might enjoy it: Anyone who loved or immensely disliked or is allergic to the Fifty Shades Bandwagon Phenomenon