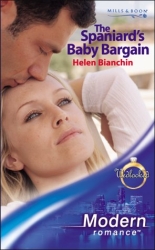 Awkward prose and hugely contrived plot, but not a total write-off.

Realising that I haven’t made a dent in the The Harlequin/Silhouette Romance Reading Challenge, I made it a point to grab a handful of HMBs on my last library visit. I picked up The Spaniard’s Baby Bargain by Helen Bianchin because it’s part of the Modern Romance imprint (to which the Rugby Union related books will belong), it’s set in Sydney, and it’s written by a New Zealand author. I was disappointed by the awkward prose and hugely contrived set-up of the story, but there were moments in the second half of the book that I thought were done well, so it wasn’t a total write-off.

When Ariane Celeste interviews billionaire (AUD or USD, I wonder?) Manolo del Guardo for a TV documentary, she finds herself staying on as a temporary nanny for his daughter. But Manolo finds the arrangement so satisfactory that he asks her to marry him–he gets a wife and a mother for her child, and she gets the child she’s always longed for and his protection against her stalker ex-husband.

See what I mean about the unbelievable premise? First, Manolo is supposed to be a hugely successful businessman with a personal assistant. And yet he’s using a temp agency for nanny services? What kind of billionaire can’t find decent long-term care for his child? Seriously. Then, he offers Ariane a job as a nanny, and she accepts even though she’s got a perfectly good job. Sure, she’s a little clucky, but seriously? Seriously?!? Then, he proposes and she accepts after a token resistace. WTF?

It’s not all bad, though. There’s a potential rival introduced after they’re married, and I was worried that a big misunderstanding  was looming, but Bianchin keeps Ariane fairly rational and shows the strength of her relationship with Manolo. The quiet moments between Ariane and Manolo are tender and sweet and quite romantic.

Still, the writing didn’t particularly inspire me for the most part. Weird head-hopping sometimes happens, and there are exclamation marks–enough that I noticed–and generally too much exposition.

This review is part of the Support Your Local Library Challenge. Click here for details.

This book is out of print, but you can find used copies via Amazon US, Amazon UK, and AbeBooks.