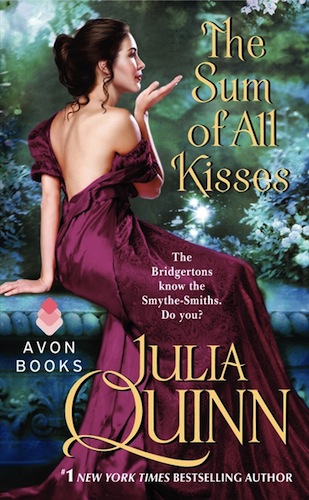 If you’re new to Julia Quinn’s work, start with the Bridgerton series instead.

Sarah Pleinsworth, of the Smythe-Smith cousins, is pissed at Hugh Prentice for causing the duel that drove her cousin away and absolutely ruined everyone’s lives. Hugh can’t stand her because she’s a drama queen. This is a romance novel, so I don’t need to explain any more.

I hated Sarah with a passion at first. She was a self-absorbed, selfish, the-world-revolves-around-me character. OMG, no one wants to offer for me cos, like, you humiliated me because you caused the duel, never mind if you don’t know who I am. I spent the first third of the book wondering how Julia Quinn was going to redeem her.

Hugh was an interesting character. He suffered much in the duel (he cannot walk properly due to a muscular ailment in his leg and is perpetually in pain) and has a psychotic father obsessed with begetting an heir by any means necessary.

Hugh and Sarah are forced to spend time together because of events brought about by the previous (lovely) books in this series. They come to get to know each other and find out that each is not what the other thought they were in the first place. Quinn does a good job of redeeming the characters, especially Sarah, who gets PWND by the hero in such a way that I wanted to high five him and scream, You deserve better!!!

The banter between the characters is what made me read on. It could easily have been trite or forced or turned into a what-the-fuckery-how-did-they-fall-in-love scenario, but Quinn uses the language between their exchanges to show how they fall in love and it is quite believable.

This is not my favorite of Quinn’s and if you haven’t read her, start with something else instead, like the Bridgerton series. The characters are unconventional, and even unlikeable at times, but there’s something different about their story and the way their interact that drew me to their story.

Who might enjoy it: Patient readers who enjoy strong interactions between the h/h

Who might not enjoy it: Readers who can’t stand self-absorbed characters, at least at first

An advance reading copy of this book was generously provided by the publisher through Edelweiss.