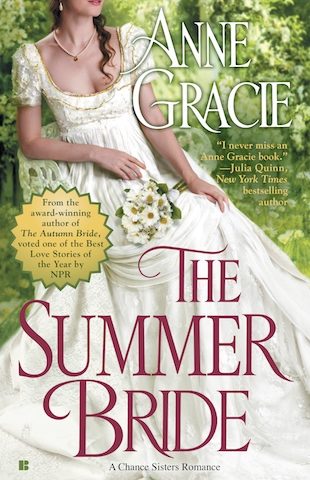 Review of: The Summer Bride

A book that will make you feel, but also think. A worthy series finale, featuring a heroine who shines. A book that will make you feel, but also think. A worthy series finale, featuring a heroine who shines.

Fans of Australian author Anne Gracie have been eagerly awaiting the final instalment in her Chance Sisters series, with good reason. If you haven’t read these books, you need to start with The Autumn Bride, which introduces the four Chance sisters, who are related by love rather than by blood, and their benefactor Lady Beatrice. This is a series best read in order.

If you’re up to speed, then you’ll be chomping at the bit to find out how Daisy Chance gets her happy ending. Of the four sisters, Daisy is the one who just can’t pass for a lady — in fact, she refuses to do so. Her dream is to open a dressmaking shop that ladies flock to for their gowns. Daisy herself refuses to pretend to be something she’s not. She’ll humour Lady Beatrice, who tries to instruct her in ladylike pursuits, but only insofar as it might help her get more customers for her shop:

Daisy had no illusions about herself. She was a little Cockney guttersnipe with a gimpy leg and a foul mouth — though she was working on the swearing and her grammar. But she loved beautiful clothes and — praise be! — she was good at making them.

Patrick Flynn runs a thriving business, and now he’s determined to marry a lady. At twelve, he was forced to find work to provide for his family, and his dream is to recreate that sense of home and family that he lost at such a young age.

Daisy and Flynn are two peas in a pod — indulged by the ton, but considered outsiders. They themselves consider themselves to be outsiders, and even when they’re trying, they just have too much spirit to conform to society’s expectations. Which means they get along very well indeed — purely platonically, of course.

Flynn is finally at the brink of proposing to a perfectly acceptable, well-bred lady whose father is in desperate need of funds. But a passing comment from Daisy gives him second thoughts about the kind of life he really wants. And when his soon-to-be-finance acts almost revolted by his kiss, and Daisy suggests that maybe it’s his kiss that’s the problem … well, he sets out to demonstrate to Daisy that she’s wrong.

And things change completely. Daisy, who knows she’s attracted to Flynn, is even more determined to keep him at arm’s length. For one, she’s trying to get her business going, and there’s no way she’s going to get married and let a man have control over her shop. For another, Flynn wants a family and Daisy has no plans of having children.

“Don’t you want children?” It was the main reason Flynn was intent on marrying; he wanted children most of all. To have a family again.

Flynn realises that what he’s looking for has been under his nose all this time, but he’s flabbergasted — though not defeated — when Daisy turns down his proposal. What follows is a lovely, touching, at times sweet courtship between two friends who just need a way to see through their fears to win the love they desire.

This book is very much about Daisy. Flynn is hot and noble and lovely, but it’s Daisy who shines. As with the previous three books, Gracie explore what it’s like for a woman in Regency England when she isn’t born with all the privileges of society. There are sobering moments in this story, and while Gracie sanitises Daisy’s past enough to keep the romantic fantasy intact, the reader is gently reminded of all the ways in which women’s lives hung in the balance, often at the whims of men.

It’s also a little jarring to read the dialogue between Daisy and Flynn. Often they speak in a lower class dialect, and some of it is transcribed in the text. Interestingly, I recently commented on Azteclady’s blog regarding my inability to relate to characters when the language they use reflects a lower class. (I’d like to think it’s because I find it difficult to read, but if I’m being honest there’s a bit of snobbery, too.) In The Summer Bride, the language isn’t overly distracting, but I did still notice it. Which is interesting, too, because it made me aware of the fact that Regency historicals, in general, don’t reflect the diversity of its time.

Which is to say: this book gave me a lot of feelings, but also a lot of thoughts.

I really enjoyed the way Gracie explores society through Daisy’s eyes. But for me, the story dragged a little once it was clear that the only barrier to the HEA was Daisy’s hang-up about her past. Flynn’s conflicts were resolved well before Daisy’s, and I always find that an awkward balance for authors to negotiate. It felt like Gracie tries to connect various themes around Daisy and Flynn’s backstories, but they never fully resolved clearly in my mind. That said, I was totally on board for their HEA, and there were some wonderfully touching moments — and a lot of funny ones — that I know readers of this series will love.

And really. How can you resist a hero who calls the heroine a hedgehog as a sign of his affection?

Content advisory: All the balls in this story are very boring