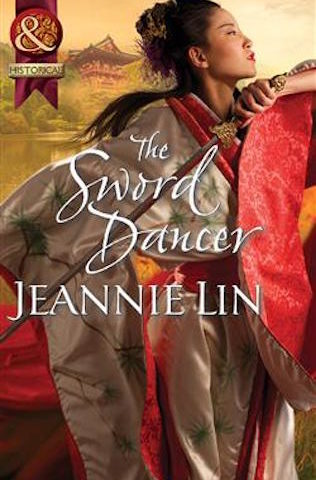 Vivid and dynamic, every time Jeannie Lin leads you into a trope, it doesn’t go the way you’d expect.

In the lead up to Romantic Times Booklovers Convention I began to voraciously plough through my TBR pile in preparation for all the book recs and freebies I planned to bring home from Las Vegas. One of my previously neglected books was The Sword Dancer by Jeannie Lin, and I am so sorry I didn’t get to it earlier.

The Sword Dancer follows Wen Li Feng, a sword dancer living on the wrong side of the law as she searches for the answers to her own mysterious beginnings. But while performing in a rural village, Li Feng captures the attention of Zheng Hao Han, a notorious thief-catcher, and it’s not long before they begin a game of cat and mouse across the Chinese countryside.

For Han’s part, he’s sees life in black and white, and takes his duty as a thief-catcher very seriously. So the fact that he finds himself increasingly attracted to and charmed by Li Feng, especially when she keeps slipping from his grasp, is somewhat disconcerting to him.

Not having read many (read: any) Tang Dynasty era romance novels before, I was a little worried I’d struggle with the setting, tripping over assumed knowledge and cultural idiosyncrasies that I had no hope of grasping. But really, why should I let something like a little nervousness stop me from trying something new? Before I read my first Regency historical (one of the Cynster novels by Stephanie Laurens, in case you were wondering) I didn’t know a curricle from a carriage, and I learnt that easily enough. So why shouldn’t I be able to learn about the criminal underworld of rural China during the Tang Dynasty?

Besides, the power of Lin’s writing is that it’s incredibly vivid and dynamic, allowing you to be pulled into Li Feng and Han’s world effortlessly. Take the moment Han first encounters Li Feng as she performs a sword dance:

The dancer’s eyes met his at the end of a turn and his heart forgot to beat. Han kept his expression blank as he returned her gaze. Her skin was glistening, her cheeks flushed. After the brief pause, she moved on and Han swallowed past a sudden dryness in his throat.

The rival thief-catcher had also stopped talking to stare, the same as every other man in the audience. Han needed to focus, maintain a critical eye. He was here to complete a job, not to be charmed by a dancing girl.

The drummers transitioned to a quicker tempo, beating out a driving rhythm as the dancer took to the air. The sword flowed with her, the flash of the blade highlighting each turn while the audience murmured with excitement.

To everyone else, the sword dancer’s movements were nothing more than a performance, but the underlying technique caught Han’s attention. There was training there. Years and years of training. Not something one usually found at a dusty street fair in some back-road town.

At last the penetrating rhythm fell away to the soft refrain of the flute. The melody floated through like clouds parting to calm the storm. The sword dancer took on a peaceful, almost languid quality before dropping back into stillness.

SEE!?! Writing dance scenes is treacherous work, but the movement in Lin’s writing just slays me.

The fact that this is essentially also a road romance means there are a lot of characters to be briefly introduced, and then almost as quickly discarded. So it’s somewhat surprising to realise that it really doesn’t feel like a fast-paced novel. I think this is in part because every time Lin gives you a trope-ified moment, she leads you in a slightly different direction than you (or at least I) expect.

But one of the most intriguing things about The Sword Dancer is that while Han deals so extremely in absolutes of black and white, Li Feng lives her life in shades of grey. As Li Feng and Han begin to work together and learn more about each other, Han is forced to question his belief system and moral code. And as their mutual attraction grows, it becomes harder for both Li Feng and Han to ignore that they stand in almost complete opposition to each other:

“I know who you are, Zheng Hao Han,” she challenged. “You believe in upholding the law, yet you’ve taken a liking to me. So you’ve told yourself I must be innocent, because how could Thief-catching Han ever befriend a common criminal?”

He could feel her slipping away as she pulled out of the shadows and back into the sunlight.

“But I’m not innocent,” she declared. “Don’t follow me anymore. We go our separate ways from here, Han. This is the way it has to be and you know it.”

And the thing is, Li Feng is right. She and Han are exactly the worst people either of them could ever be attracted to, let alone love. Because even if they manage to work through the emotional turmoil and find common ground, Li Feng is a wanted criminal.

If you love the thief and thief-catcher/cop/private detective trope you’ll find yourself very much at home with The Sword Dancer. Similarly, if your jam is the ‘you’re the worst possible person I could love’ trope. I loved the adventure and the romance of The Sword Dancer equally, and am still not sure what I prefer more: when Li Feng and Han work together, or when they work at odds.

Content advisory: This book contains sharp objects and a heroine who is equally as deadly as her hero.

You can find an extract of the book here. Published by Mills and Boon.