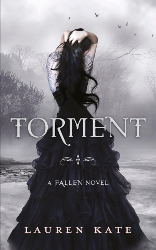 A page turner that raises more questions that it answers—just the kind of torment to reel Decadence right into another series.

Lauren Kate’s Fallen series is about a girl who falls in love with a fallen angel before she dies at the age of 17 and is reborn. In every incarnation, Luce Price’s life draws her to the immortal Daniel Grigori, but the ending has always been the same. Until now.

In this incarnation, Luce is plagued by the sinister-looking shadows (I picture them resembling the Dementors from Harry Potter) that no one outside the supernatural world seems to be able to see. Also, she has not been baptised, so this is her last life. She will not be coming back after she dies, so she is now in great danger because, in addition to the requisite teen angst over teh epic relationship, the outcome of Daniel and Luce’s love alters the balance of power in the war between angels and demons.

In the aftermath of the events of Fallen (book 1 of the series) the demons and angels have agreed to an 18-day truce. Torment, the second book in the series, covers the span of that truce so you know things won’t yet be resolved.

Daniel and his demonic rival, Cam Briel, agree that Luce should be enrolled in a school for angels for her own protection, but that both must stay away from her and use the time allowed by their truce to kill Luce’s many enemies before they can kill her.

There, it feels like a bit of a repeat of Fallen because not only do the nephilim (half human, half angel) who grew up with the Daniel and Luce legend know more about her than she does herself, Luce is surrounded by a main female friend, another two casual friends and a nice male friend who’d like to be more. Her roommate in Torment feels like an amalgam of Arianne and Molly from Fallen.

In this book, at least Luce is asking more questions and being more proactive. While her passivity may have been more justified in Fallen, she would have become difficult to like and respect as a character had it continued.

Torment lives up to its name. It raises more questions than it answers and also refers to the frustration Luce feels over Daniel’s refusal to answer her questions (join the club, girlfriend). My biggest unanswered question is: why doesn’t Daniel take Luce straight to a church where she can be baptised and her future incarnation secured? Does it have to do with the current Luce’s ability to see the Announcers?

Although the story is told in the third person, the vast majority of it is told from Luce’s perspective, so we get to find things out as she does and share in her frustration when answers aren’t forthcoming. But I wish we could see more of Daniel. Luce has good reason to question whether Daniel is the one for her: we don’t know him very well. We see that he loves her, but is that enough to make it requited?

Kate handles the power imbalance in Daniel and Luce’s relationship better than it was done in the Twilight saga. Luce questions whether she is really meant to be with Daniel, if his feelings for her are real and if their love is worth the high price that has been paid for centuries. Sadly, this conflict sours the few scenes with Luce and Daniel together, but it’s necessary for Luce to become established as an individual, especially if we’ve been told this wasn’t something her previous incarnations did. Kate conveys Luce’s internal conflict over whether or not she should press Daniel again for answers she’s not likely to get or if she should hold her tongue so she doesn’t spoil the little time they have together.

Luce has a very black and white view of the world, which to me shows that she has more growing to do. Cam is a demon; therefore, he is evil, no matter that he seemed to actually have genuine feelings for her and treated her well when she needed a friend.

As much as I question the wisdom of only releasing one book a year to a target audience not known for its appreciation of delayed gratification, I found myself turning page after page, scouring them for clues and getting into Luce’s struggle to find out who she was and who she is meant to be. As frustrating as the mystery can be, it worked in keeping me reading and it will make me read the next book as well. Dammit.

A review copy of this book was generously provided by Doubleday (Random House Australia).