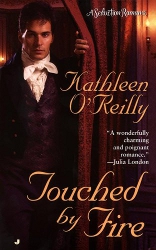 I’m determined to review every Kathleen O’Reilly book in my shelf, starting with her debut into historical romance.* The writing shows promise, but lacks the subtlety of her later work.

* Update: Although O’Reilly wrote this novel first, based on publication dates this is actually her second novel. Her first published work of fiction is A Christmas Carol.

When I discovered Kathleen O’Reilly’s books, I went on a mission to track down her backlist. O’Reilly’s first work of fiction, Touched by Fire, is a Regency romance—the only historical romance she’s published so far—featuring a hero with a deep, dark secret, and a heroine who just won’t take no for an answer.

Colin, Earl of Haverwood grew up with the shameful secret that his birth was a result of his mother’s rape in the hands of a convicted murderer. The circumstances of his birth, and his adoptive father’s certainty that Colin is afflicted with the same murderous lust, has driven him to avoid any real relationships with women.

However, his late father’s will specifies that Colin must marry soon, or he’ll lose control of an orphanage—one of Colin’s pet projects and a cause he isn’t willing to give up. He’s determined to choose a bride who won’t rouse his passions, but instead stumbles across Sarah Banks, who, of course, is the exact opposite of what he’s looking for.

Sarah hasn’t lacked for a marriage proposal, but has yet to find one that wasn’t inextricably linked to generous inheritance. When she pretends that her father had lost it all on a wager, it sends suitors scampering away but also leads to a rumour that she was part of the wager and that Colin was the winner.

Colin is all over the place in this novel, and it was … well, irritating. Sarah, who keeps chasing after him—at times, it seems, for no other reason than he has sherry-coloured eyes—with absolutely no regard for dignity or reputation is just as bad.

Colin gets to play the hero when several attempts on Sarah’s life are made. This adds a bit of excitement to the plot, but the pacing wasn’t quite right and the external plot and emotional arc didn’t always gel for me. Colin also has this fixation on being a ‘DragonSlayer’—a kind of persona he invented as a child, in response to wanting to be everything his biological father was not. The whole DragonSlayer aspect felt childish and repetitive to me.

Despite all that, the novel does show glimpses of what I love about O’Reilly’s writing. Giles, Colin’s butler, isn’t very believable as a Regency butler, but he provides much of the humour in the story. I also liked the sexual tension between Colin and Sarah. O’Reilly knows how to write angst without wallowing in it.

This is an enjoyable novel if you’re not fussed about Regency heroines with modern sensibilities. I don’t think it’s nearly as polished as my favourite O’Reilly books, but I keep it because I’m determined to have a complete set of her work.

As far as I know, you can only find the print edition of this book in secondhand bookshops. I found mine at The Bookshop in Coolangatta.