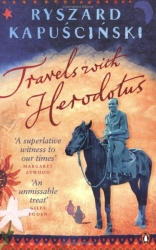 For my birthday, Kat got me this book on Herodotus. Herodotus was the original traveller and historian. Born in Greece in the 5th century BC, he wrote several books but is most famous for The Histories which is frequently quoted in everything from the earliest Greek tomes to mythology, philosophy and even modern history.

Travels with Herodotus was written by another famous traveller, Ryszard Kapuscinski, a Polish journalist who won numerous awards for his writing. He covered Africa, the Middle East and Asia and is known for his keen observation. Sadly, he died last year and this was the last book he wrote.

Kapuscinski begins his travels as a young journalist for a Polish newspaper. He describes his first trip overseas to India in a time when no information is available to him—Stalin is still alive and many books are still repressed—and he speaks no English. Reading his experiences, you can feel his sense of discovery and awe upon reaching a foreign land very, very different from his.  This sense of discovery permeates the book, adding to the experience and making you feel as if you are truly with him. Kapuscinski is given Herodotus’s The Histories as a gift when he first sets out, and he parallels his experiences with that of Herodotus’s, who travelled to most of the same places he does on his own journey of discovery. During Herodotus’s time, people relied on oral tradition, delivered by storytellers in different villages and towns in the known world, to preserve their history.

I quite enjoyed this book because I felt that I was being taken on a journey not just through the world but through history—from Herodotus’s time when the world was mostly just eastern Europe and the near east and a bit of Africa and populated by fascinating tribes that no longer exist, to the 1950s–60s with the communist bloc and the emerging independence in Africa. The book also contains a strong element of self-discovery as Kapuscinski discovers there is more to his world and to himself.

The only thing that might put readers off is that in Herodotus’s time they were a more brutal kind of people, with a lot of bloodthirsty wars and killing that does get described very straightforwardly, so be prepared for these descriptions! Other than that, I would recommend this to anyone, especially the frequent armchair traveller who wants to learn a bit about the world and how it used to be.

Kat’s note: I gave this present to Wandergurl a year late. That’s how long it took me to find a copy stocked in a bookstore!