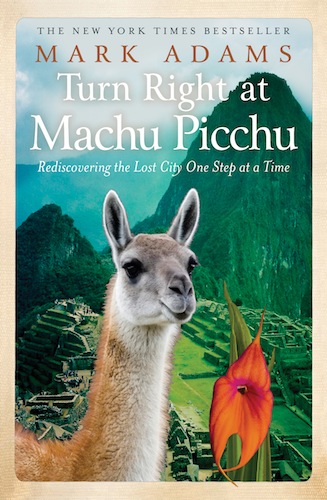 Whether you’re a tourist, an Indiana Jones wannabe (or you just love Harrison Ford) or an armchair traveller, this is the perfect book to take you away to faraway lands.

In line with Travel Tuesday (#traveltuesday) on Twitter, Wandergurl is attempting to review a travel book once a month. It does not always happen, obvs.

Once upon a time, there was a writer called Mark Adams. He wrote for an adventure magazine but never really had any adventures. One day, he decided to follow the footsteps of Hiram Bingham, the man who made Machu Picchu known to the world. This is Adams’s thoroughly engaging, adventure-filled story.

About five years ago, I did a version of the Inca Trail called the Lares Trek (I booked late and couldn’t get a permit to do the actual one). After about four exhausting days, I made it to Machu Picchu and it was one of the best experiences of my life, never mind that I had never hiked before and had problems with altitude. Like Adams, prior to this adventure I had never slept in a tent (unless you count that one time in high school when they made us go camping overnight), or owned hiking boots. It was the trip that inspired many more adventures, so when I saw this book, I had to have it.

Despite being married to a Peruvian, Adams had never done the Inca trail or explored much of Peru. He sets out to do so with the assistance of hardcore Australian explorer John Leivers, who is part Indiana Jones, part invincible man, and a troop of porters and llamas. His intention was to trace the journeys of Hiram Bingham III, the man who first made public the discovery of Machu Picchu and was originally said to be the first (white) man to discover it.

His first journey patterned Bingham’s journey to Choquequirao, one of the last refuges of the last Incan emperor during the Spanish invasion. His account of the journey inspired me to look up treks to Choquequirao and confidently say, Oh, yeah, I can do that. Yeah, I’ll do that. Despite the majority of them being at least five days (nine if you want to go all the way to Machu after) and me not having hiked that long since maybe the last time I was in Peru, in 2008?!?

He went on to cover Bingham’s other journeys and in the end trek the legendary Inca Trail. Along the way he was mesmerised by the age-old question, just exactly what was Machu Picchu built for? (I will leave you to read the book and come up with your own theories!)

I really enjoyed this book. I felt that it was a perfect blend of history and adventure. Adams intersperses his own journey with Bingham’s, as well as Incan history and legend as preserved from the time of the conquistadors. It is an interesting, thoughtful journey, never dry or boring. As you can see, it inspired me to put my boots on again (it’s not happening anytime soon, people!). Whether you’re a tourist, an Indiana Jones wannabe (or you just love Harrison Ford, whose character , they say, was inspired by Bingham) or an armchair traveller, this is the perfect book to take you away to faraway lands.

Who might enjoy it: Armchair travellers and wannabe adventurers