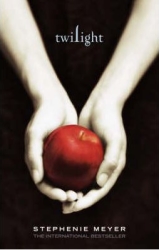 For some reason, the Twilight craze swept right by me. Despite reading a lot of great reviews, it never struck me as a book that I desperately wanted to read. I was curious, though, and when the film came out, I finally put the book in reserve at the library so I could read it before I see the film.

Twilight has so many obvious flaws, and yet I couldn’t put it down. Here’s a sample of what went through my mind as I read this book:

Half of brain: Why are we still reading this?
Other half of brain: Shut up, I’m reading.
HoB: This is ridiculous
OHoB: OMG, so thrilled!
HoB: Teenage boys would never say that.
OHoB: Aw, so sweet…
HoB: Bella sucks. And why is her default reaction icy?
OHoB: She’s a nerd, but popular … it’s just the way I always though high school should’ve been.
HoB: Edward seems to scowl a lot. And smirk. Smirky teenage boys are beyond annoying.
OHoB: He’s so conflicted. Iloveit!
HoB: OMG, I hope James gets them all.
OHoB: No, Bella, it’s a traaaap!
HoB: Desperate girls are so not attractive.
OHoB: Vampires don’t have wrinkles.
HoB: Is it the end yet?
OHoB: Ooh, what’s this…
HoB: FFS, DON’T READ THE EXCERPT TO THE SEQUEL!
OHoB: Oops.

Twilight is about Isabella Swan, who’s just moved to a new town and a new school. On her first day, Bella meets Edward Cullen, who seems to have taken an instant dislike to her. But she’s intrigued by him, and gradually she gets to know Edward better even though he’s determined to keep his distance and even though he warns her that he’s dangerous. In the meantime, Bella makes new friends, but she’s drawn to Edward and he’s the one she wants to know better. Eventually, she works out his secret: Edward is a vampire. Unlike other vampires, Edward and his family don’t feed from humans, but their natural instinct is still drawn to human blood—which makes any relationship with Bella complicated, not to mention dangerous. When they encounter another vampire whose eating habits aren’t quite so restrictive, Bella begins to understand that their relationship isn’t just putting herself at risk, but also the people she loves most.

One of my main problems with Twilight is that Stephenie Meyer’s writing is often inconsistent, and I actually think the novel would have been stronger had it been written in the third person rather than the first (Bella’s POV). I never truly felt that Bella reached any real sense of self-awareness, and I found her internal monologues fairly boring. There were many times when I pulled back from the story and thought, Teenagers don’t sound like this.

I also don’t think that Meyer is particularly accurate or articulate when she describes the characters’ reactions and emotions. Edward likes to smirk and scowl. Bella has a habit of overreacting to small things, which I found very odd. I couldn’t decide if she was just emotionally immature or utterly devoid of humour.

It’s a slippery slope to creepiness and obsession

I honestly can’t tell you what I liked about Bella or Edward. My friend Gutsy gave me her take on Bella: “Bella sort of washes out, allowing the reader to project herself onto the character.” I think this is fairly accurate because, I can tell you, I was projecting all sorts of my own teenage angst onto her … and loving it! Still, the notion of abandoning friends and family to chase after some good looking guy isn’t the message I’d be giving to teenage girls.

The power dynamics between Bella and Edward is quite creepy if I look at it rationally. Edward’s a gazillion years old—and the book doesn’t really try to make him sound any younger—while Bella’s only 16. Her obsession with him and the way he tries to control her behaviour disturbed me. A friend of mine had this to say (the post is titled “guilty!!!”), and I have to agree:

I find it extremely difficult  to suspend my disbelief, even for a moment, that no matter how perfect, and muscular, and [fragrant], and sparkly Edward is, he still falls under the obsessive, stalker, potentially abusive category. I do not find it romantic when he drags Bella to his car by force. I don’t think it’s romantic at all how he stalks her. I would be seriously worried about my teenage daughter if she were that unhealthily obsessed over someone. She speaks more of his physical assets, and the feeling she gets from being with him, than his personality (not that either of them have much personality to speak of).

I hate their early stages of flirting, and the whole twenty questions game they play. It is stupid and boring. He’s been alive 104 years. Why doesn’t he have anything more interesting to talk about? I find his mysteriousness and evasiveness annoying, not appealing. I wouldn’t waste my time with a man who wastes mine, who can’t talk to me in a straightforward way.

Look, I don’t think YA novels necessarily have to be about teenage role models. But I do feel that YA stories, and particularly YA romance, must incorporate something empowering, whether it’s about making better choices, or finding your own way, or standing up for what’s right, or recognising that adults can be deeply flawed, whatever. There has to be some kind of self-awareness by the end of the novel, and I don’t think either Bella or Edward (who’s not even a teenager) gave me much satisfaction in that sense.

Bella still ends up obsessed—and actually even more so—and Edward can’t manage to do the right thing and leave her. Yes, I know it’s a romance, but isn’t that the point? This is their central conflict, and instead of doing the honourable thing and then finding a way to resolve it, he pretty much decides to hang around and wait for Bella to grow out of it. That’s so not romantic.

Do vampires work in YA romance?

I really think vampire romances work better in adult romance fiction unless the vampire is newly turned, or there’s something about the non-vampire that’s unusually mature and therefore creates a sense of equality (e.g. Buffy). I don’t feel Bella has that at all, and it doesn’t help that she’s alternatively petulant and “icy”. She doesn’t even come across as emotionally mature, even though I think the scenes where she prepares dinner for her dad and worries for her mum are supposed to indicate that she is.

I’m curious to know what you guys think: Am I the only one who has a problem with a 100-year old vamp ending up with a 16-year old?

Despite being a great page-turner, Twilight lacks subtlety, and the writing actually gets in the way of the story. Yet, once in a while, Meyer gets it just right, and when she does, the story captures the uncertainty and exhilaration of young love so well that you can’t help but be swept away by the story. I wasn’t planning to read the sequel at all, but now I’m very sorely tempted. Someone please talk me out of it…

This book is part of the What’s In A Name? Challenge (time of day).