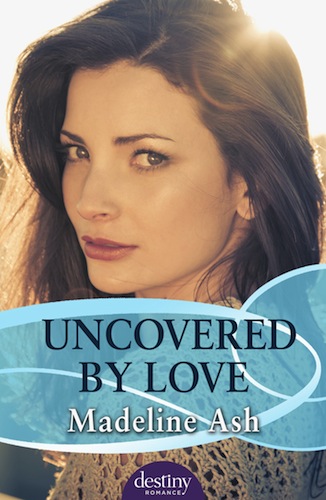 Review of: Uncovered by Love Vera is recovering from a long bout of illness and is preparing to take her first leap away from her comfort zone by going to Spain when she is invited to exhibit her work in a gallery owned by her late mentor’s brother, Leeson (‘He has a Wikipedia entry and everything.’). Leeson is attracted to Vera, and he knows she won’t just go to bed with anyone, but he refuses to commit to a relationship due to personal issues he’s been harbouring since he was a kid. Vera has trust and self-esteem issues of her own, but eventually, she agrees to a fling and revels in how Leeson makes her feel—normal.

Australian author Madeline Ash’s debut shows promise. The dialogue between Vera and Leeson is snappy, modern and full of delicious innuendo. Their flirtation is subtle, wonderful and thrilling. Unfortunately, there’s a disconnect between the dialogue and the narrative, which has a more old-fashioned tone to it.

To be frank, it was a little nanna for me. This feeling is exacerbated by having a 25-year old virgin heroine who is not only an artist but an artist with no business sense whatsoever. (She prices her work according to her intuition about the buyer’s love for the work.) This character is a little too 80s for me, and I’m not sure if peasant skirts are mentioned, but if not, then I certainly imagined her wearing them.

Then there are the issues. Issues, people! Vera and Leeson do have serious issues to work through, but one can only take so much repetition and faux mystery—their insecurities are pretty obvious from the start.  Anvils, argh! This is a pity, because I love when authors tackle conditions that aren’t often seen in romance books. Great idea, but less than stellar execution.

By the end of the book, I was convinced that the conflicts are all wrong for the characters. Their insecurities don’t match their personalities. Their conflicts are independent of each other, so any tension supposedly arising from their attempts at self-protection feels contrived. And if I were to suspend disbelief and accept what the narrative is telling me, I couldn’t see how Leeson could have become so successful, or how he can sustain a relationship with Vera.

There’s a similar lack of consistency in Leeson’s personality. There’s this lovely scene with Vera:

‘I’m not going to do this with a man who already knows he won’t stay with me. That’s not who I am.’

Leeson’s shoulders rose and fell as he breathed deeply, seeming to fight for control. ‘Then I might have to do something about who I am.’

But there’s also the scene where he asks if it’s common for Vera to carry condoms in her bag.

And don’t get me started on the very weird dynamic between Vera and one of her over-protective younger brothers. (I could see what Ash was trying to do, but the brother almost always came across as either borderline creepy or unbearably bratty.)

I really do wish I had liked this book more, because a scene like this…

‘Remember how I asked you to treat me like a lover?’ she asked quietly. He froze and Vera rolled onto her back to look at him in the moonlight.

‘Is this how you always treat us?’

He swallowed, held her stare, but didn’t answer.

‘Is this how you always make us feel? If it is, I imagine you’ve got a lot of heartbreak to answer for.’

Leeson frowned. ‘Have I broken your heart?’

Who might not enjoy it: Women who bring their own condoms