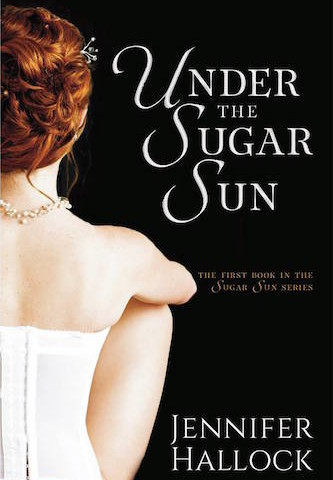 Review of: Under the Sugar Sun

A worthy debut that tackles a difficult and unfamiliar historical setting. Kudos for accuracy, even if it gets in the way of a satisfying romance. A worthy debut that tackles a difficult and unfamiliar historical setting. Kudos for accuracy, even if it gets in the way of a satisfying romance.

Note: Updated with clarification around terminology and to correct some of the information around books 2 and 3 of the series.

Georgie Potter has made the journey from Boston to Manila to follow her fiancé and search for her brother, missing after the Balangiga massacre in Samar. The Philippines is still chafing under its new administrators, and even land barons like Javier Altarejos are struggling to balance political, economic and social tensions. Georgie has a two-year assignment to teach in Javier’s community, but this becomes increasingly untenable as Georgie finds it difficult to ignore some uncomfortable truths: that her fiancé is a bigot; that Javier is more than just an employer to her; and that her brother might still be alive and she is the only one who can bring him home.

Author Jennifer Hallock has done an impressive amount of research to render the backdrop of this story. I’m a complete dunce at history, but the setting became vivid in my imagination. Hallock lived in the Philippines for a time, and I think this allows her to layer the story with cultural nuances that would be difficult to extract from historical records alone. By the third chapter, I was able to let go of my tension as a Filipino reader determined to nitpick the details, and just fall into the story.

I read somewhere that Hallock intended this book to be a Philippine-set romance written in the style of a Regency. Hallock almost gets this right if not for succumbing to the temptation to linger on historical details, to the point where I dithered over how to categorise this book. Historical romance? Or historical fiction with romantic elements? In the end, I went with the former for the simple reason that the romantic arc drives the characters’ decisions. That, and the fact that the historical events in 1902 take a backseat to Georgie and Javier’s love story.

But the lushness of the detail is part of Under the Sugar Sun’s charm. The romance starts off slowly, overshadowed by the world building that Hallock has to do to make the story familiar to the reader. In Regency romance, there’s no need for this because we’re so familiar with the (at times inaccurate) social and historical details. In 1902 Philippines, Hallock has no such luxury as an author and if at times she errs on the side of caution, I can’t bring myself to find fault in that.

Surprisingly, sexy times are…very sexy. They’re not borderline erotica by any means, but Georgie and Javier aren’t shy, and the heat level felt just right for the story. I did wonder at times if Georgie and Javier were too incautious, but this is an area where I’m more than willing to sacrifice historical accuracy, so no complaints from me. Javier might be a terrible hacendero* — around the halfway mark I was convinced he would lose all his land by end of the book — but he’s a swoony lover:

‘I’ve been kissed before,’ she said, meaning it as both warning and permission.

He laughed against her temple. ‘Oh, have you? Did you like it?’

She breathed out a word. ‘No.’

And then she kissed him.

* Updated to add: Filipino readers might wonder at this spelling. I emailed the author for clarification and this was her response: ‘”Hacendero” is the old Spanish spelling, still used widely (though not exclusively) in the Philippines, especially in Negros and the Visayas. It is a bit antiquated to some, but it is the primary spelling I found during the period.’ She offered sources but I’m happy to take her word for it. :)

That said, the romantic arc left me with mixed feelings. Georgie’s appeal as a heroine diminishes as the story progresses, while Javier plateaus by the halfway mark before stepping up in the last third of the book. Georgie’s strength for me was her conscious attempt to combat bigotry, her openness to this new land and its people, and her struggle to reconcile her American values with the Filipino way of life. Her frustration, for example, at finding her students missing from class because they have to work during harvest time, sums up a lot of the tension between Georgie the teacher and Javier the sugar baron:

He needed her to understand. ‘Maestro, this island’s economy runs on sugar. If I cannot plant my cane, I won’t have anything to harvest next year. If that meant only I suffered, I’d escort those girls back to school myself. But without sugar, no one gets paid and no one eats. It’s more pressure than you know, and I’m struggling enough this season.’

In the end, I think Hallock sacrifices too much of her characters for historical accuracy. A hero who is a sugar baron is destined to leave me conflicted. I have too many cultural hang-ups to ignore the history of sugar in the Philippines, and in the time of this novel, sugar production would have been a feudal economy in which most labourers were bound by debt slavery (a fact clearly shown in the story). It’s not enough that they have the freedom to flee to the mountains to mount a revolution, nor that Javier is a benevolent hacendero who does his best to ensure that his workers are as comfortable as he can make them. I can’t disassociate myself from the heartbreaking plight of the peasants, nor can I ignore the results of feudalism in modern-day Philippines. On top of that, you only have to know a little bit of what happens to the sugar barons between then and now to realise that any happy ending for Javier and Georgie’s future family is tenuous at best. As terrible as it sounds, I would have preferred a sanitised version of this period in history, where the bourgeoisie dance the rigodon as if they were doing the quadrille in Regency England, and Javier finds a way to free his workers from debt, and the epilogue offers a view of the future in which the entire family finds other means by which to make a living.

There’s a lot for me to unpack in this story. The layers of privilege between the characters make the romance very complicated for me. Very rarely will I ever be completely in the hero’s shoes in a romance, but in Under the Sun, my empathy is always with Javier. So when, in the last third of the story, Georgie does something unbelievably dangerous and stupid, I almost didn’t finish the book. Hallock fails to make the case for why Georgie would even think she can travel to Samar — where the Americans were basically slaughtered — to retrieve her brother. When it’s over, Hallock fails to redeem Georgie as a romantic heroine. Whereas Javier’s journey to rock bottom is heartbreaking and truly high stakes — to the point of foolishness, in my opinion — Georgie’s romantic arc is shallow at best. Why is she a suitable match for Javier? How does she demonstrate that she’s fit to stand by his side, when he has so many obligations? The story doesn’t provide satisfactory answers.

And yet…I’m so glad I read this book. I can’t explain what it feels to read a setting that is both familiar and strange, and people whose futures you can imagine because you’ve lived in that world. In Regency romances, I can ignore all that because they don’t apply to me at all. In Under the Sugar Sun, every detail is both glorious and painful.

The third book in this series, Sugar Communion (2017),  will feature Javier’s cousin, Allegra, the illegitimate by-blow of a priest, and his half-brother, Andres, who is actually a priest. I can tell you now that this pairing pushes all my buttons, and although I’m excited to see where Hallock will take these characters, I will most definitely be killing a fairy for that book! (That said, Andres is a standout character in this book and I’m pretty sure readers of this series are looking forward to his defrocking — in all the ways!) In the meantime, there’s a prequel novella out next month, and Georgie’s brother, Ben, and Javier’s cousin, Allegra, will be the hero and heroine of book 2, Sugar Moon (2016).

Content advisory: Stupid foreigner decisions in the last third of the book, and not enough grovelling by the heroine.

You can find an extract of the book here. Self-published. Filipino readers might also be interested in Mina Esguerra’s thoughts on this novel. She’s much more succinct that I am. :)