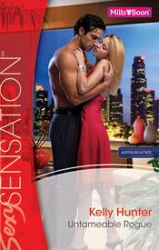 This was my first Kelly Hunter book, but it won’t be my last. I don’t care what anyone says about the super daggy Karate Kid-style set up at the beginning of the novel, or the constant references to Chinese zodiac signs (I am the warrior tiger, hear me roar!), this book was thrilling!

From the outside, Madeline Delacourte seems a bit…suss. Her late husband plucks a much younger wife off the streets of Jakarta, and she later inherits and now runs his multi-million-dollar business. But like all Mills and Boon trophy wives, Maddy has a heart of gold. She rescues stray kids from the streets and brings them to her friend Jacob’s dojo to become his apprentice.

As she drops off her latest street kid, she meets Jacob’s brother Luke, who’s in between missions. Luke is a bomb disposal expert and he’s quick to judge Maddy, who doesn’t rise to the bait because, frankly, she’s heard it all before.

Still, the pheromones are simmering and it all gets a bit much in the lift, and once they’ve worked off their lust—no condoms, if that bothers you—they realise that, well, it might be a longer work out than they’d first thought.

Luke won’t make promises about the future. He doesn’t want to have to choose between Maddy and his job. His job is extremely important to him, and to Hunter’s credit, she doesn’t water down Luke’s dedication to his job and belief in what he’s doing. Meanwhile, Maddy accepts his terms, but has enough self-respect to insist that she be treated as more than just a booty call.

It’s inevitable that Luke and Maddy have to compromise a little. To do so means they both have to believe in themselves a little more, which was a pleasant surprise. Let’s be honest—self-enlightenment is a bit hit and miss in category romance.

Also hit and miss is the warrior theme running through the book. Luke has ‘a warrior’s honour, soul deep and absolute. Duty-bound, forsaking all else.’ Over the top heaven! But isn’t that why we read category romance? Still, some readers might find constant references to warriors and tigers and honour and duty wearisome. There’s more to Asia than Kung Fu Panda, people!

Did I mention that the street kid’s name is Po?

I have mixed feelings about Singapore as a backdrop to this story. Neither protagonist is Asian, and there really isn’t enough space to capture any subtleties about the setting, resulting in a bunch of characters and situations that feel clichéd. I could be wrong, but Luke’s martial arts studio felt like a mishmash of Chinese and Japanese styles and terminology.

Nevertheless, I couldn’t put the book down. Yes, despite the fact that my library copy had a great big unidentified stain running through pages 13–59. I know. Ew.

Who might enjoy it: Anyone who ever had a crush on Daniel LaRusso

This book is no longer in print in Australia.