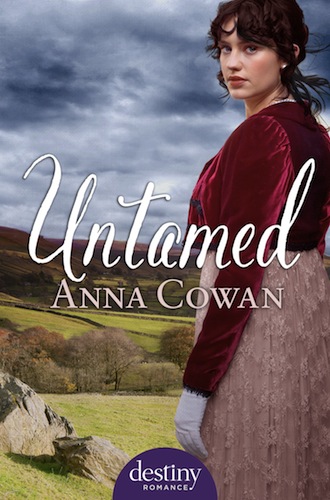 When I heard that Australian writer Anna Cowan had sold her cross-dressing duke novel to Destiny, I couldn’t wait to read the book. I’m an occasional visitor at Cowan’s blog, and her analyses of romance tropes, characters and themes led me to expect an extraordinary debut effort. I wasn’t disappointed, but Untamed is also not an easy book to read or even to like. It’s definitely not an easy book to review.

Kit Sutherland agrees to bring Jude, the Duke of Darlington, to her country home in exchange for his promise to end his affair with Kit’s married sister. Outwardly charming, Jude can’t help but manipulate the people around him, sometimes for no other reason than for his own amusement, so When the Duke arrives dressed as an aristocratic lady, Lady Rose, Kit recognises the danger he poses to her family’s equilibrium—as well as her own.

Jude is hovering on the brink of self-destruction, but after a chance encounter at a ballroom where his lover’s sister, Kit, inadvertently gives him her scathing opinion of the Duke of Darlington, Jude is drawn by instinct to her.  He ingratiates himself into her family and her life, and thwarts her every attempt to keep her distance—and he does so arrogantly, selfishly and ruthlessly. Eventually, their deceit is unravelled at great consequence to Kit and her family, and Cowan reveals the darker undercurrents surrounding Kit’s relationships with her siblings, as well as Jude’s secrets.

First, I’m not convinced this is actually a historical romance. It sounds like a historical romance and Cowan uses the convenience of the historical setting and its social mores to create a somewhat familiar backdrop for romance readers, but she doesn’t let the setting get in the way of the plot. This will be a deal breaker to many readers, but it seems clear to me, by  the way the story is crafted, that Cowan never really makes an attempt to be faithful to history. The setting is more like a stage in which Cowan sets up her characters, and the backdrop is as fluid as it needs to be to tell their story.

Much has been made of the the fact that Untamed features a cross-dressing duke, but this is less an exploration of gender as a plot device to enable Jude to live with Kit and, eventually, share her bedroom. Cowan explores gender in other ways, however. Kit is physically strong, runs the farm and acts, for all intents and purposes, as the head of the household, while her elder brother Tom sentimentally names pigs marked for slaughter. Jude’s circle consists of close male friends—described as dandies—who are inexplicably loyal to him. Kit’s sister warns her that Jude has slept with both men and women, and Jude himself acknowledges that he isn’t a manly man—a fact that has shaped his life until he finds Kit.

Despite this, Jude remains, at least in my mind, an alpha hero, though not in the traditional sense. He is aristocratic—‘He was so aristocratic he was practically brain-damaged.’—belligerent and arrogant, rather than physically dominant. He is in stark contrast to Kit’s brother-in-law, who spends much of the book wanting to bash Jude senseless, but he wields power nonetheless and is cunning in the way he manipulates people around him to do exactly as he pleases.

‘Katherine,’ he said, and he was calm, his infinitely sad eyes trained on her. ‘Why are you so angry with me?’

She made a frustrated, incredulous noise that might have been a laugh in a different girl. ‘I feel for you,’ she made herself say — she wouldn’t play with this man who knew nothing but games, ‘but one fit of despair doesn’t wipe away the cruel things you said last night, or why you said them. We’ve no candles left, and the paraffin’s too low. I have to fix the wall you broke, and my brother’s downstairs cradling a pig that should be bacon by now. These are things that don’t disappear, and are not made right by one night of understanding.’

What I found most beautiful about how each character is placed is that their gendered traits contribute to their strengths, their weaknesses and their conflicts. It wasn’t until Kit had to undress the cross-dressing duke that I found myself enchanted by Cowan’s writing. The contrast between Jude’s masculinity—as seen from Kit’s eyes—and the feminine garments that she has to remove is beautifully expressed. Once Kit and Jude are, in effect, trapped in her house and are constantly in each other’s space, Cowan’s prose comes to the fore. The earlier scenes in London set up the plot, but feel too disjointed and overly mysterious for readers to get a proper foothold into the story.

There’s very little plot to Untamed, in the sense that there are no spies or dead bodies or stolen heirlooms. Most of the time, there’s just Kit and Jude dancing their way around each other, often with Jude selfishly forcing himself between Kit and those she loves. Any external plotting is wholly driven by the love story, but I’m perfectly happy to be led when the path is paved so beautifully by Cowan’s words. Take this scene, for example, early in the book, when Kit accidentally sees Jude fornicating with the ball’s married hostess:

Kit couldn’t move away. She couldn’t stop herself from watching what bruised her. He had wound her in so much tighter than she could ever have imagined, and she could not shrug this away — the truth that some part of her had reached for him and he was squandering himself on this woman.

My biggest criticism of Cowan’s writing is that it can sometimes lack a sense of fluidity. To put it rather indelicately: sometimes it feels as if her craft is showing. Perhaps it’s because I’ve read—and loved—authors whose styles overlap with Cowan’s that the writing can feel a little derivative. This is not to say it’s deliberate, but I think it’s an indication that the author is still exploring her craft and hasn’t quite eased into a comfortable cadence. As I read Untamed, I felt like I could ‘hear’ Cowan’s preoccupations with the genre and its tropes, and—I’m only guessing here—the influence of some of the genre’s more literary authors. In Untamed, there are echoes of the complex family dynamics of a Jo Goodman story, the introspection of Cecilia Grant’s characters, the tortured hero that Laura Kinsale excels at, and the flawed hero often working against the heroine typical of Meredith Duran—all lushly written with an undercurrent of darker emotions. There’s humour to be found in this book, but it’s often dry, cynical and bordering on meanness. Forget the flirtatious misses and reformed rakes; there’s a dreaminess to Cowan’s prose that belies the sharpness and, at times, cruelty of her characters. Her ability to create images and express emotions with words is breathtaking:

He didn’t make a single move towards her, but she was breathing like she’d been running, like she’d been drowning, and her heartbeat rushed past her ears like a thousand needles dropped on marble.

Untamed isn’t a comfortable story; the plots and characters defy expectations. It takes what romance readers think we know of Regency romance and almost throws it back in our faces, and the reader must make sense of the fragments left. Few of the characters are as they seem, and almost everyone is broken and selfish in their own way, sometimes to the detriment of others and of themselves. I particularly love Kit’s family, who stands together against the world but is deeply damaged within. There is a lot of duality in Untamed, and Cowan doesn’t force a tidy conclusion to all of it. Even the duke’s dandies demonstrate some steel when pushed; they’re effectively his family even though he doesn’t realise it until perhaps the end of the book. Everyone has their comfort zones and their breaking points, but by the end of the book, most are in a place where they can exist comfortably in their own skins.

She kept her hand firmly on the small of his back as they climbed. Her eyes had adjusted, and she could see the outline of him ahead of her, and the walls on either side. He shuffled and stumbled like he was blind, and his breathing shook him so hard he could barely stay upright.

She gritted her teeth against the sound of it, and knew that no matter what he said, this was why he’d come to her. So that he could fall apart in some anonymous part of the world that he need never visit again.

That woman, that body, had held him all night. He had broken against her, and she was unharmed. He was in awe of her. He was repulsed by her. The thought of her coming back up the stairs, and being near, and shaving him, made him break out into a sweat.

For me, the underlying message in Untamed is that love is found where one can express one’s true nature, without fear, to another person. It’s not a selfless message of love, but it’s a refreshing one.

Cowan’s debut is ambitious, and it’s one that has inspired spirited debate among romance readers. (You can read some of them at Dear Author, Kaetrin’s Musings and GrowlyCub’s LJ.) Whether or not it works for you will depend on how well Cowan’s narrative voice can lull you into looking past the flaws of the story. It has one of the most romantic lines I’ve ever read:

His eyes snapped to hers, and he smiled, imperfect and slow against her shoulder.

I can’t wait to see what this author has in store for us next.

Who might enjoy it: Historical romance readers who are tired of the sameness in the genre

An advance reading copy of this book was generously provided by the publisher via NetGalley. It’s available as an ebook and will be released in print on August 21.