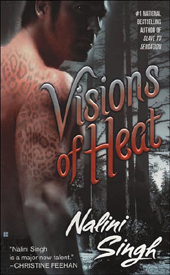 When I won an ARC of Visions of Heat by Nalini Singh, I went into squee mode because Singh’s first book, Slave to Sensation, blew me away. I don’t say that lightly. I devoured the book. And then I pimped it out to Wandergurl, who loved it so much she went and bought her own copy. And then I asked for my copy back so I could reread it. So winning the ARC of the sequel? Squee!

I was supposed to post this review a few weeks ago, but for various reasons didn’t get around to it. It’s probably just as well that I didn’t review the ARC as I meant to. Because the first time I read it? I wasn’t overly impressed. Don’t get me wrong–it’s a great read. But I’d reread Slave to Sensation first and the sequel just didn’t seem as compelling. I was bummed!

When I got the *real* book last weekend, I decided to reread it on its own. And … I really enjoyed it. I still don’t think it’s as compelling as Slave to Sensation, but I think I understand the characters a little better now.

I’m not going to do a summary because I suck at it. Plus, you can go read the blurb.

What I loved about Visions of Heat…

What I felt could have worked better in different circumstances…

What distracted me from my enjoyment…

All in all, Visions of Heat was a really good read. I didn’t race through it like I did with its predecessor–I think Visions of Heat is slower in pace–but I enjoyed it well enough. If I didn’t have the first book to compare it with, I’d probably have fewer nitpicks. The slower pace allowed me to think through the story a lot more–and that was probably for the best because the world building was more intricate in this book.

Singh has a list of other reader-blogger reviews here (many of which have thorough plot summaries, unlike this one). While some enjoyed it more than others, I think most (all?) of us agree that Visions of Heat is pretty damn good. I can’t wait for the next novel in the series. It’s giving me goosebumps just thinking about it. Click here to read excerpts from Visions of Heat.