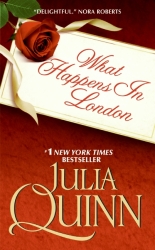 Julia Quinn bounces back to form with this witty romantic comedy. Squees all around.

I discovered Julia Quinn after reading The Duke and I many, many years ago. I loved the Bridgerton series but honestly found the books after that to be sadly lacking. I didn’t like The Secret Diaries of Miranda Cheever and I found The Lost Duke of Wyndham and Mr. Cavendish, I Presume to be repetitive and disappointing. So I waited a while before buying this one and was pleasantly surprised to find Quinn back to her old form.

What Happens in London was lovely and delightful. I haven’t been able to say that about a book (much less one of Quinn’s) in a while. It made me smile at the most inopportune moments. I had to put it down and wait until I got home so people wouldn’t think it was silly that I was laughing to myself.

Olivia Bevelstoke is the daughter of an earl. She’s a bit bored this season since her best friend married her brother (see The Secret Diaries of Miranda Cheever) and moved away. She’s got a new neighbour, and the gossipy friends that she has now have told her that he killed his fiancée. So she decides to check him out.

Sir Harry Valentine has no idea why his beautiful neighbour is checking him out—he’s not a spy, just a Russian speaking translator—but hey, he can have fun with that. Things get a little more involved when Olivia attracts the attention of a Russian prince, and Harry has to figure out if there’s anything more to that than meets the eye.

Quinn does a wonderful job of working out the development of Olivia and Harry’s relationship through witty dialogue. Their humorous banter provides for a lot of squee moments. Sebastian, Harry’s BFF (Best Friend Forever) also steals the scenes quite a bit with his ‘acting’ and snarky comments. (I was excited to find out his book will be out next year.) The rest of the characters are well depicted, and Quinn does a good job of fleshing out their personalities through dialogue as well.

The only concern I had was that Olivia was the daughter of an earl, and Harry was merely a baronet. I think that in real life, an earl would take issue with his super popular I-could-marry-a-Duke daughter marrying below her station, but as this is a romance, and the ending was done rather well—squee, squee again—I am willing to forgive that.

A resounding yay! I would recommend this book for anyone who needs a smile on their face. If you are stressed, down in the dumps, need a good laugh, read this book. Even if you aren’t feeling this way, get it anyway. I loved this book so much, I forsee rereading it well into the future.

What Happens in London is a companion book to The Secret Diaries of Miss Miranda Cheever. It is published by HarperCollins under the Avon imprint in Australia and the US, and by Piatkus in the UK. The Australian edition was released this month; the US and UK editions were first released in July.

AUSTRALIA: Booktopia | Ever After | Fishpond | Intrigue |