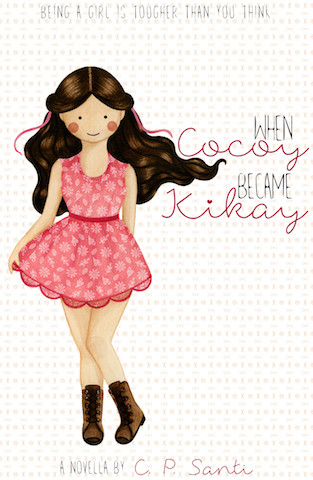 Review of: When Cocoy Became Kikay

A funny, touching makeover story with a dash of romance. Like a Sweet Dreams book set in the Philippines. A funny, touching makeover story with a dash of romance. Like a Sweet Dreams book set in the Philippines.

When Cocoy Became Kikay by C. P. Santi is not genre romance, per se, but this novella hearkens back to the Sweet Dreams books I loved as a teen, with the added bonus of being set in the Philippines. (That said, if the title led you to expect a transgender character — which is what I initially thought — well, that’s not what this book is about.)

The daughter of a military officer, Maria Francisca Suarez prefers to go by her nickname, Cocoy, hang out with her guy friends playing games, and generally act like a tomboy. But Jaime Arguelles, her childhood friend and crush, likes girly girls, so Cocoy embarks on a strategy to win him over — by wearing pink.

My dad had raised me to think like a soldier. While other girls had groomed their Barbies, I had played chess and Game of Generals with my dad. And I was a pretty good tactician — if the last of our biweekly games were anything to go by.

I had always been interested in covert ops, secret intel ops, and espionage. And I guess I saw this whole thing as a sort of sting operation, with Jaime as my target.

The plot is fairly predictable, but to Santi’s credit, this doesn’t detract from my enjoyment of Cocoy’s attempts to be who she thinks Jaime wants her to be. Santi also refrains from judging whether Cocoy the tomboy, or Maria the kikay (basically, a girly girl), is the better option. Jaime isn’t demonised for preferring girls who wear pink, and the only judgment against Cocoy’s transformation is the way she prioritises her relationship with Jaime above everyone else. The makeover itself is something of a revelation:

My new look gave me confidence and courage. There’s a certain satisfaction a girl finds when she manages to catch the attention of a boy she like. I sort of get a high when I see Jaime looking at me like I’m a puzzle he can’t figure out — but that he’d like to very much. And the feeling is intoxicating! No wonder the beauty industry is earning so much.

I don’t think you need to be intimately acquainted with Filipino culture to appreciate this story, though you might need to google some of the cultural references. (I’m going to try a Nutella-Chippy-pandesal sandwich next chance I get!) You’ll also miss out on some of the puns, but the essence of this story remains the same — a teenage girl learning that the world is bigger that she knows, taking risks to follow her dreams, and finding the courage to stay true to herself.

Santi’s way with words is gentle yet honest, and despite the story’s short length and fairly straightforward plot, I can’t help but be drawn to the earnest, hopeful vulnerability in her characters. I want to gather these kids up ‘for a super-duper, megatight group hug’ and tell them that they’re going to be amazing people.

Content advisory: You will want a sequel where Cocoy and her friends get their HEAs. There isn’t one.

You can find an extract of the book here (Wattpad). Self-published.