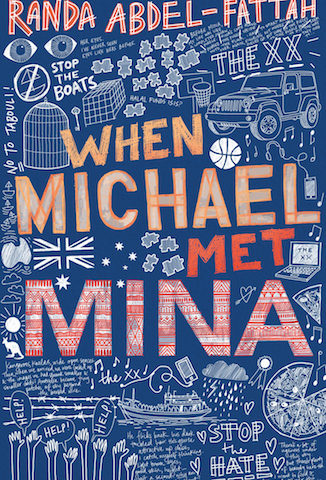 Review of: When Michael Met Mina

Deeply political and wonderfully nuanced, this might well be the Looking For Alibrandi for Australia's current generation of teens. Deeply political and wonderfully nuanced, this might well be the Looking For Alibrandi for Australia’s current generation of teens.

Look, I’m going to put something out there right from the start. This book is deeply political, and the fact that my personal politics aligned so closely with the themes in When Michael Met Mina absolutely contributed to my enjoyment of it. I’m honestly unsure if it would have the same effect on someone who is anti-refugee to begin with though.

The other thing that I need to acknowledge from the start is that Randa Abdel-Fattah’s When Michael Met Mina isn’t my usual scene. It’s Young Adult. And honestly, I haven’t delved into a new YA novel for about seven years. But honestly, I just have so much love for Abdel-Fatah ( T | F | W ) that I decided to take a crack at reading one of her books. Enter, When Michael Met Mina.

When Michael sees Mina, they’re at a rally for refugees, and he’s immediately smitten. He thinks she’s one of the most beautiful girls he’s ever seen. The problem is they’re standing on opposite sides of the picket line. Mina is there to protest for the rights of refugees, while Michael is with his dad who has just founded a new anti-refugee political party. A few short days later, Michael sees Mina again, this time as a newly transferred student at his exclusive Northern Sydney high school.

Meanwhile Mina not only doesn’t notice Michael at the rally, but their first interaction at school doesn’t show him off in a good light. As he regurgitates his parent’s anti-refugee stance in their eleventh grade Society and Culture class, Mina can’t help but respond. She and her family fled Afghanistan as refugees, heading for Australian shores in a leaky boat. While her classmates discuss the ethics of ‘queue jumping’ and ‘boat people’, Mina literally embodies their rhetoric.

Eventually Michael and Mina begin to get to know each other better, and even start to understand each other. Helped along by their forced partnership on an assignment, and Michael’s sheer tenacity. It’s all very sweet, and awkward, and high school-y as they slowly (really, really slowly) head toward a romance.

But the true star relationship of When Michael Met Mina is actually the developing friendship between Mina and Paula. In all honesty, I think I was more invested in Paula than in Michael.

Paula is the kid in class almost everyone feels safe to pick on. She’s friendly with people, but she doesn’t actually seem to have friends before Mina arrives. Possibly because she has an obsession with quoting Oscar Wilde in regular conversations. She’s smart, strange, generous, fun, and mostly unselfconscious about being a little bit of an oddball. Basically she’s who I hope I was in school. She also started to text Mina updates on her commute to school each day literally on the the second day of becoming friends.

Good morning Mina. This is a public service announcement from Bus Route 419. Heard on the train just now:

Expect updates on further Gen Y embarrassments in the future.

PS I know we’re Gen Y too but these sorts are a liability.

PPS Meet me at the cafe in ten.

It would have been easy for Abdel-Fattah to have made Michael’s family and his friends into caricatures of awfulness, but she held back. Michael’s parents are both charismatic and educated. Their opinions are built on a foundation of rationality and logic. They aren’t bad, ignorant people. They aren’t grotesquely awful. They’re normal. They work white-collar jobs. In fact his mother is a university lecturer (albeit only as a casual). It’s easy to see why Michael would accept their viewpoints without much (read: any) critical engagement. Though when he does finally start to question them, I’ll have to admit that a huge sense of relief came over me. Most of the counter arguments in the book are made during Mina and Michael’s discussions but seeing the ‘Aussie Values’ views get raised only to go unchallenged definitely grated.

Abdel-Fattah wrote When Michael Met Mina while she was writing her PhD on Islamophobia in Australia. It’s easy to imagine that many of the scenes of Islamophobia that Mina, her family and her friends, face stem from true accounts which can make it easy to forget this is supposed to be a work of fiction. The classroom scenes, in particular, are moments I think a lot of Gen Y and teens will recognise from their own lives.

If you grew up with Melina Marchetta’s books and have been wondering what this generation will have, I think the answer lies in Abdel-Fattah’s writing. When Michael Met Mina felt a lot like Marchetta’s Looking for Alibrandi for 2016’s teens. I’m not convinced Abdel-Fattah has quite hit the right combination of romance, teen angst, and family drama just yet (mostly because there wasn’t enough romance), but if When Michael Met Mina is anything to go by, I do think it’s coming.

Content advisory: I normally use this space to make jokes, but the scenes sharing Mina’s backstory are a bit distressing. Mina and her family were refugees who arrived in Australia by boat, and spent time in Villawood. Yes, the book is aimed at teens, so it’s not hugely descriptive, but if this is a topic that is triggering: proceed with caution. Similarly, there are a lot of instances of Islamophobia. A lot.

You can find an extract of the book here. Published by Pan Macmillan.