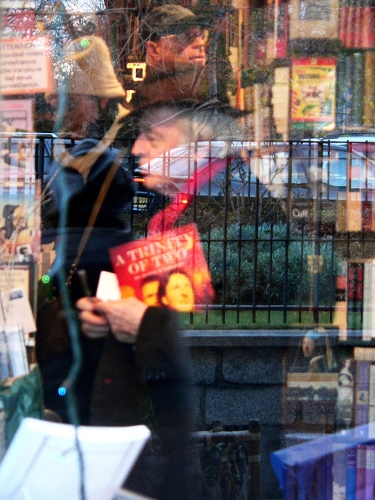 If we are to truly destroy the joint, we need more people to stand up for readers and say, ‘These are the books we’re reading, and they are important.’

Disclosure: I was on the F Word: Romance panel with Beth Driscoll in 2015, and I was in two workshops with Meredith Jaffe at Book Expo Australia in 2014.

As a reader of what many people might consider lowbrow fiction, I’m left bemused by the literary kerfuffle sparked by Beth Driscoll’s Could not put it down, a review of three new books by Susan Johnson, Antonia Hayes and Stephanie Bishop. Driscoll discusses the relationship between a book’s packaging and the way the text is received by literary gatekeepers — specifically, those in charge of determining merit. The tension between commercial success and critical reception is inevitably gendered — how often have we heard authors lament ‘chicklit covers’ that appeal to female readers but alienate awards committees?

To a reader who doesn’t subscribe to established ideas of what constitutes a ‘good’ book, Driscoll’s review merely lays out the the existence of this tension. That this gap is slowly being bridged in the area that Driscoll defines as ‘middlebrow’ doesn’t erase the fact that women are often the losers in this space — women authors feel the loss of prestige and are overlooked for awards, and women readers feel it necessary to justify our so-called guilty pleasures. As one such reader, I read Driscoll’s review as celebrating the accessibility of Johnson, Hayes and Bishop’s books, while also pointing out that their appeal to the middlebrow ought not exclude the books from serious literary critique. Indeed, Driscoll asserts that the books would more than stand up to such scrutiny. As a reader who finds literary awards almost worthless for book recommendations — in that they never feature books I enjoy reading — I can only sympathise. If middlebrow books find it difficult to get on literary lists, lowbrow fiction has no chance.

Driscoll’s review generated a response from the books’ authors, As one in rejecting the label ‘middlebrow’, that typifies the kinds of literary conversations aimed at shutting out readers like me. Between the dense language and the misguided attempt to impose authorial authority on how a book is read, well, it’s not the most convincing argument for me to buy their books. It’s a common mistake for authors to assume that a review is in any way aimed at them. Reviews are for readers, and in this world of social and cross-platform media, readers don’t just consist of the literary elite. Reviews serve the lowbrow and the middlebrow, too.

That the authors felt compelled to dismantle the term ‘middlebrow’ echoes the kind of literary snobbery they are at pains not to be seen defending. It’s an interesting kind of effacement, and one that seems purely self-serving. Readers don’t care about being thought of as middlebrow; we just care about reading great stories. Driscoll’s review serves the reader’s needs, with additional commentary for literary snobs that basically amounts to: It’s a mistake to overlook these books.

Meredith Jaffe’s response to Driscoll’s review, Middlebrow? What’s so shameful about writing a book and hoping it sells?, is typical of the noveau genre. It’s a kind of middle-class outrage at the notion that books enjoyed by well-educated readers are seen as less worthy of praise. (After all, we read the classics, too! Look at how diverse our reading tastes are!)

But few champion the trashy books, the bodice rippers, the space operas, the fanfics. And yet this is where storytellers are innovating. Many classics in these genres are heirloom books, kept by readers for the next generation to enjoy. Authors and readers of these books have given up on awards and mainstream reviews because they are designed to shut out our books.

Australian literary culture still chafes at commercial appeal. You only have to look at how Graeme Simsion’s eminently readable and well-written debut, The Rosie Project, was discussed — how many reviews included what amounted to a disclaimer that it’s not just a romance? And despite the Stella Prize’s intention to represent and celebrate Australian women writers, its longlists are curiously devoid of romance, urban fantasy, and the more popular flavours of speculative fiction and erotica. Until the judging panel includes an advocate for lowbrow and middlebrow fiction, women writers in these categories will never break through the genre ceiling.

In some ways, it hardly matters. Women writing in these genres are carving out successful careers. Readers are curating their own literary canons, sometimes in wilful ignorance of what we’re told we should read. Calling a book highbrow, middlebrow or trash only influences readers who have been browbeaten into believing that they can’t discern good books from bad. Driscoll’s review champions the interests of the reader by evaluating how engaging Johnson, Hayes and Bishop’s books are, while also making the case for their inclusion in spheres of literary influence.

If we are to truly destroy the joint, we need more reviews like Driscoll’s, which don’t cringe from using terms like middlebrow, but acknowledges them as labels that direct readers to the books we enjoy reading. We need more reviewers who can speak the language of the lowbrow as well as the highbrow. We need more authors who take these loaded terms with equanimity, recognising that current systems for assigning literary merit are structurally predisposed against women writers and readers. We need more people to stand up for readers and say, ‘These are the books we’re reading, and they are important.’