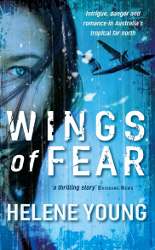 In which we discover that an Aussie book by a real Aussie does not include the words ‘fair dinkum’.

You can probably tell that I haven’t read many Aussie authored novels. Or, if I have, I didn’t really know they were. Or they weren’t set here (or in this era!). Most of my Australian based romances came in category form, where characters lived in the outback, were written by Americans, said ‘ass’ instead of ‘arse’ (Kat’s mega pet peeve) and said ‘fair dinkum’ a hell of a lot. Now, there’s nothing wrong with ‘fair dinkum,’ but honestly I think I have heard it fewer times than the number of years I have been in this country.

Wings of Fear was nothing like the stereotypical category romance I read growing up, proving that if you want to write about Australia, you really do need an Aussie to get it right.

Morgan Pentland is the captain of a border patrol plane that flies over Northern Queensland, keeping watch for smugglers, illegal fishermen and the like. Rafe Daniels is a Customs agent assigned to join her crew for the time being. He’s there to investigate a potential breach in security and, without her knowing, she is his prime suspect. In the course of his investigation shit happens, their plane crashes, but of course they fall in love—except they have to save the world first.

As you can probably already tell, I really liked the language and the realism in the characterisation. The people in this book could have been my neighbours (except nicer and less snotty in the city-sider kind of way!), they spoke like someone I could meet while walking down the street. There was something about that familiarity that was comforting, and made me appreciate the characters more.

Morgan is strong and fragile at the same time. While her strength and emergence from a difficult past was shown in her actions I felt that her back story came in a bit of a small info dump. There was also no need for Rafe to repeat how much she must have gone through and how strong she was through it all in his head every time he thought about her. I’m really glad she got her happy ending because a lot happened to her, both emotionally and physically. I winced with every blister she got and really felt for her, even if we had such different backgrounds.

Rafe is a decent bloke. (Or, in American: a good man.) He seems like the kind of guy that you’d want around to back you up. I for one wouldn’t mind having him around. :) I do feel, though, that this is more Morgan’s story, and so he isn’t as well fleshed out, but he doesn’t come out looking like a prop either, so in the end his character is pretty well-balanced.

I loved the secondary characters. I could totally see the banter between Gavin and Lauren and the fussiness of Morgan’s kindhearted neighbours. I did, however, have slight issues with the bad guy, whose name was Nadal. I had to consciously focus a bit so I wouldn’t keep seeing the world’s number one tennis player and his really nice butt!

This book made me want to travel to Northern Queensland, which says a lot, considering my first words were something like, ‘Where the hell is Weipa?’ I wanted to sit in a hammock on the beach having a beer. It was also exciting and action packed—I was late twice back from break because I was so caught up. The author’s experience as a pilot clearly shows in the way the scenes are played out. I didn’t find the descriptions too technical, and overall I understood most terms clearly, though OMG, so many acronyms! (This, I believe, is because all governments are bureaucracies that need them!)

If there was one thing I didn’t like it’s that in the end Rafe proposes to Morgan. I know this is typical of romance novels but to me that doesn’t have to happen at the end of a contemporary romance anymore. While I believe that fell in love, that they were going to make the effort and go the distance, it didn’t seem realistic to me that suddenly he would propose. I felt it was more believable that the story was left open-ended. Given Morgan’s many issues and the way Australians these days are more likely to do long-term relationships that may even just continue on without marriage thanks to the de facto option, they did not have to get married.

I liked this book. It was a strong, action-packed debut. For me it was less of a suspense and more of an adventure—with guns. I would recommend this to anyone who wants to read a romantic suspense novel with a strong heroine in a not-so-typical setting. I’m looking forward to reading more by this author.