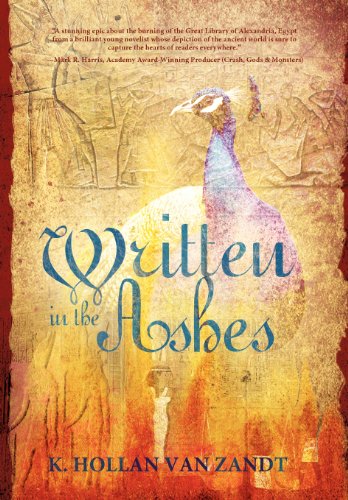 A compelling, ambitious work of historical fiction set around the time of the burning of Alexandria’s magnificent library. I like big books and I cannot lie.

Let me begin by saying how daunting it is to review a work of quite epic proportions (and this is only book 1!). Once upon a time, I did entertain dreams of being an Egyptologist, thanks to Henry Jones Jr., but I claim no formal qualifications—just a fascination with history in general because it has been said that ‘the past is never dead. It’s not even past.’

‘Hatred is a poison, you cannot drink it and expect another to die’.

What an amazing line! I feel as though an essay might better suffice, but then Written in the Ashes is a journey that is better experienced without the spoilers that a review of that length would no doubt be littered with. Yes, the novel is inspired by actual historical figures and events, but it is told mainly through the eyes of Hannah, a Jewish shepherd girl abducted from her home in the deserts of Sinai and sold into slavery on the streets of Alexandria.

Admittedly there are shifting viewpoints, most notably that of Hypatia, daughter of mathematician and philosopher Theon of Alexandria who herself was to become a philosopher and the first recorded female mathematician. Written in the Ashes is, of course,  a fictionalised account of her as the headmistress of the Great Library of Alexandria, but it’s not really Hypatia’s story. I am ashamed to say I knew next to nothing about her and I’m grateful that reading Ms Hollan Van Zandt’s novel prompted further research into this brilliant woman.

Can I say that I have never come across a more inspired use of such an unassuming two-letter word in the English language before? With it, Hollan Van Zandt effortlessly evokes the quiet intensity of the novel’s myriad of characters. While I found that I lost interest in what went on with other characters (such as the main antagonist Bishop Cyril of Alexandria) and simply wanted to follow Hannah’s journey, I understood that these parts were crucial in the telling of the story as a whole.

Eloquently told in three parts, Written in the Ashes has an engaging heroine who learns to survive in the life she was viciously thrust into. Exploring the religious conflict that plagued Alexandria circa 415 AD, it’s not a religious book per se, but in touching on the intermingling subjects of science and religion it delivers a wonderful message of tolerance.

On that regard, I was reminded of Yann Martel’s Life of Pi, in which the book’s protagonist, Pi (as in the mathematical constant), is baffled by agnosticism because he believes that ‘to choose doubt as a philosophy of life is akin to choosing immobility as a means of transportation’. I thought he would make great friends with Alizar (Hannah’s kind and successful vintner ‘owner’) who ‘adhere[s] to any religion that has love as its foundation…[because] God has no boundaries…[and] we are the ones who imagine separation’.

There is also an underlying thread of romance that I appreciated—for no grand tale is complete without a romance—and even an unexpected love triangle that wasn’t intrusive to the main plot and was part of Hannah’s growth as a character. I’m so glad that this book has been picked up as a TV mini-series and, last I checked K. Hollan Van Zandt’s website, she is in talks with the writer of the fantastic HBO series Rome. This would be amazing on the screen if it were adapted properly.

This book is a compelling, ambitious work of historical fiction that retells the tumultuous events that culminated to the burning of Alexandria’s magnificent library and the brutal death of its headmistress through the eyes of a beautiful young Jewish shepherdess. It’s not a romance novel, but the love story in it is strong and aids to propel the story.

Who might enjoy it: Historical fiction readers partial to tomes

A review copy of this book was generously provided by Virtual Author Book Tours, but I ended up purchasing the hardback halfway through reading it.