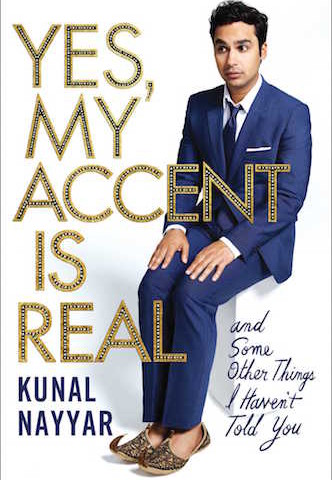 If you’re looking for a light read that will make you laugh, or a pick-me-up from a bad date, or a break from a particularly stressful week, or just something entertaining, this is the book for you. Even if you have no idea what The Big Bang Theory is. Yesterday, I went to the bookstore to buy a different book…and started reading Yes, My Accent is Real by Kunal Nayyar. It was so funny that despite my aversion for big books — newly published large Australian faux hardcover trade paperback editions — because they’re heavy and a pain to carry around, I bought it. I pretty much finished this book in a day.

Nayyar plays Raj in The Big Bang Theory, a show that I love but haven’t seen in a while. (It’s hard to catch up 8 seasons at 22 episodes per season!) Raj is known for his extreme shyness and selective mutism, which I have now found out is a real thing, and not just made up for the show. Raj’s adventures with his friends and in dating are hilarious, and Nayyar is a great actor. He’s a pretty good writer as well.

Nayyar’s book is technically a memoir, but as he says he’s not old enough to have one (he was 34 at the time of writing) it’s a collection of essays on his life. Nayyar was born in England but grew up in New Delhi, India, and the essays on his childhood are filled with amusing anecdotes of what it was like to go to an all-boys’ school, not know how to speak to girls, and then suddenly end up going to college in America. Some of his experiences sounded very much like the stories my guy friends shared about…well, going to all-boys’ Catholic schools and not knowing what to say to girls. Nayyar’s voice is very relatable, and reading the book feels like sitting with an old friend and catching up after a long time away.

The book had a lot of laugh out loud moments — I can only imagine what my flatmate thought of me laughing to myself at 1am — and some pretty poignant ones, too. Nayyar shares his love for his family, particularly his admiration for his father, and his (mis)adventures with romance, culminating, of course, in that happy ending when he met and married ex-Miss India Neha Kapur in a six-day ceremony. His observations, inside jokes, and ability to make fun of himself made the book a thoroughly entertaining read.