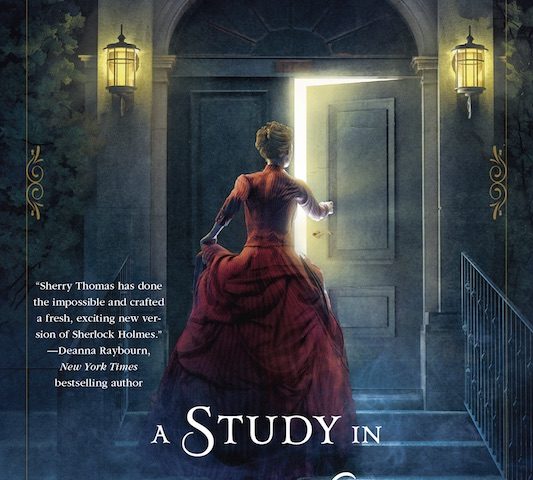 Review of: A Study in Scarlet Women

Intriguing characters who don't reach the heights they could have. I suspect the second book will be amazing. Also: not a romance. Intriguing characters who don’t reach the heights they could have. I suspect the second book will be amazing. Also: not a romance.

I have a serious love of Sherlock Holmes, and any time there’s a new adaptation, I’m Right There. And because my two biggest disappointments about Sherlock Holmes is that the female characters are really lacking* and that there’s no romance, I was convinced Sherry Thomas [ T | F | W ] had written her adaption for me. I could not have been more wrong.

There are a couple of reasons why A Study in Scarlet Women didn’t work for me. And to be fair to Thomas, the first is that I made a basic mistake right from the start: I judged her book by its cover. I looked at that lady in her scarlet dress, and the cracked door with soft light spilling through it, and the name Sherry Thomas emblazoned across the top, and thought, This is a beautiful, sexy, historical romance with a mystery subplot. And it wasn’t until I was roughly halfway through that I truly let go of that wrong assumption. Because it’s not a romance at all. It’s a historical mystery. And not a sexy one.

While I am willing to agree that Thomas is under no obligation to write books to my exact specifications (yet), my other problems with it are of a legitimate nature. Like that its opening chapters were fucking confusing.

So by the time A Study in Scarlet Women finally got around to introducing Charlotte Holmes, our very female Sherlock, who only solves cases via correspondence so no-one will know that he’s actually a gentlewoman, I was already several chapters in and feeling a little overwhelmed.

The youngest of four sisters, Charlotte decides from a young age that she does NOT want to marry. So she strikes a deal with her father: she will participate in the season until she’s 21 years old, and then he’ll fund her dream to become the headmistress of a girls’ school. But her father, Sir Henry, reneges on the deal. So Charlotte takes matters into her own hands by losing her virginity to a married man. It’s not entirely clear (to me, at least) if the plan was to punish Sir Henry or force his hand, because she certainly doesn’t enjoy the sex. Neither does she particularly like or respect the man.

Anyway, her plan backfires and becomes a little more public than expected, so Charlotte runs away from home and eventually begins to work as Sherlock — posing as her own assistant. Which is when the mystery and detective work finally begins. It’s worth pointing out that the running away from home thing is not out of ‘shame’. By this point, it’s very clear that she’s decided to escape her parents’ control, and by extension their home.

Considering this was actually a detective novel, it certainly took a long time to actually get around to the detecting side of things. And once it gets started the mystery plot itself is fine, if somewhat uninspiring. A trio of unexpected deaths occur, and Charlotte’s father and sister are implicated. In order to clear her family’s — specifically her sister’s — name, she teams up with a widow/former actress (Mrs Watson), a police inspector, and her childhood sweetheart.

Do not get excited about that childhood sweetheart, though. He’s married to someone else. And unlike the devirginating dude from earlier, he has Morals.

But what’s really frustrating about this book is that Thomas has crafted some really intriguing characters, but hasn’t put them to any particular use. Charlotte is interesting enough, in the way that Sherlock is always interesting. But Sherlock doesn’t really work without a Watson. And while Mrs Watson is probably supposed to be Watson … she doesn’t bring much more than a convenient place to base their venture from (Baker Street). Meanwhile, Charlotte’s sister, Livie, actually does bring a Watsonesque energy, having been her confidante and guide to social interactions. But she’s left behind in the family home very early on and, without her, Charlotte’s behaviour lacks insight.

I know I’ve probably been a little harsh on this book, especially because once I resigned myself to the lack of romance I did start to enjoy it. In fact, I suspect the second book in the series will be genuinely amazing because all the character backstory Thomas so clearly wanted readers to have has been handed to us already. I just wish I could’ve loved this one right from the start.

* Look, fellow Sherlock fan, don’t even try to come at me with Irene Adler as your example of a strong female character. Sure, we’re told she’s equal (or possibly superior) to Sherlock in skill, but we’re only ever shown her being bested by him. Or Moriarty aka the laziest character invention in the history of literature.

Content advisory: The cover is ridiculously beautiful and conducive to uninformed one-clicking. But this is NOT a romance. Also, beware adulterous love feelings and adulterous sex, though these are mutually exclusive.