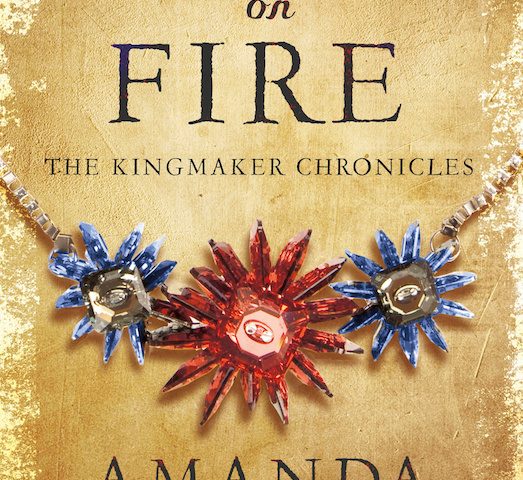 Review of: Heart On Fire

This trilogy had so many plot threads and character arcs that could have been amazing, but a lacklustre finale filled with exposition and easy outs left me disappointed. This trilogy had so many plot threads and character arcs that could have been amazing, but a lacklustre finale filled with exposition and easy outs left me disappointed.

Fantasy romance is one of my favourite cross-genre combinations, but also the most difficult to find satisfaction in. When I read Amanda Bouchet’s [ T | F | W ] debut novel, A Promise of Fire, I thought I’d found another C.L. Wilson to love, autobuy and squee over. Unfortunately, books 2 and 3 have not lived up to the promise.

Heart of Fire concludes the Kingmaker Chronicles trilogy, and it’s not a book that stands alone. (Beware spoilers in this review, for they are impossible to avoid.) If you’re here for the romance, it’s done by the end of book 1 — maybe partway through book 2 — so all that’s left are somewhat boring and repetitive bonking scenes that show Cat and Griffin really, really love each other. And despite some seeds of doubt cast in the course of this story, I never really believe that their relationship is ever in peril.

Heart Of Fire begins with Cat dealing with the aftermath of winning the Agon Games and taking control of Tarva City. It’s not all roses — there are disparate communities to unite, resentments to soothe, and the looming confrontation with her biggest nemesis, her mother. The story opens with a deep betrayal from within her family, and sets off a chain of events…actually, no, it does not. It kicks off some tedious internal angst about who to trust for Griffin, and if what they’re doing is right for Cat. But this plot line? It goes nowhere interesting. It does demonstrate that the gods be with Cat, and omg is it ever so tedious that they turn up repeatedly in this book to butt in when she’s in trouble.

Deus ex Olympia I could have done without. Couple this with a tedious amount of internal monologue, and I’m basically just racing to the end so that I can get this story over and done with. Almost everything I loved in A Promise of Fire is absent in Heart of Fire — the witty banter, the sexual tension, the amazing world building, and the clever plotting. The pacing, the plotting and the writing in this book were all just…not as good, and I could feel it from chapter 2 onwards. I agree with this analysis by @MerrianOW:

The gas lighting in bk2 lead to DNF for me. I did feel author knew what her story was but not how best to tell it

The craft is just not strong enough to build and sustain the climax of the trilogy. Instead of personal quests and action, the book relies on vast tracts of exposition to explain the plot, the characters, and Cat’s magical abilities. Even when Cat is forced to understand her powers, it’s done in a blunt and utterly miserable way, and done in an all-or-nothing kind of fashion, instead of letting her come to her power slowly and triumphantly. The gods basically bully, torture and taunt her into magical maturity.

There were flashes of the kind of writing I loved when I started this series:

For anyone who started 2018 questioning their choices. ? … ? Heart On Fire by Amanda Bouchet … #paranormalromance #fantasy #speculativefiction #amandabouchet #bookstagram #bookquotes

For all that I love romance novels, I seem to be drawn to secondary characters with doomed love stories! That said, Bouchet does include snippets of a secondary romance that I found utterly charming, though slightly pervy in terms of how the story is shown, but I’m okay with pervy. YMMV.

There are also characters whose stories are unfinished by the end of the trilogy, and a couple of these added to my sense of dissatisfaction at the novel.

One of the huge themes in this novel is the idea of motherhood, and what it means to be a mother — Cat is pregnant, and her biggest adversary is her own mother. I don’t dislike this as a general plot point, but like everything else in this book, the theme is overdone, too simplistic, and just tedious. Cat’s fetus being sentient to the point where it can be controlled by Cat’s mother makes for an interesting plot point, but I’m uncomfortable with the assumptions this makes. Cat’s protectiveness over her pregnancy is never really questioned, and I would have liked to have seen her making difficult choices between, say, protecting it and someone who is actually alive and also loved.

Griffin could have been used to show this dilemma — for example, who is more important: Cat or the baby? — but his priorities are never questioned either. He’s The Noble Hero and never puts a foot wrong in this book. Finally, Cat’s mother sacrifices herself in a final act of redemption. I get it. In romance, we love redemption and the idea that love wins. But for a series that has prosecuted the idea that Cat’s mother is intrinsically evil — and done so very well — this change of heart is difficult to believe, and frankly, doesn’t absolve her of all the horrendous things she did in the past. It’s a hollow redemption without justice. Death is an end to her reign, but it doesn’t deliver justice to everyone she wronged. The book does touch on this, but not enough to satisfy me.

Generally, this trilogy had so many plot threads and character arcs that could have been amazing, but a lacklustre finale filled with exposition and easy outs left me disappointed that it didn’t deliver more.

You can find an extract of the book here. Published by Hachette (AU) and Sourcebooks (US).