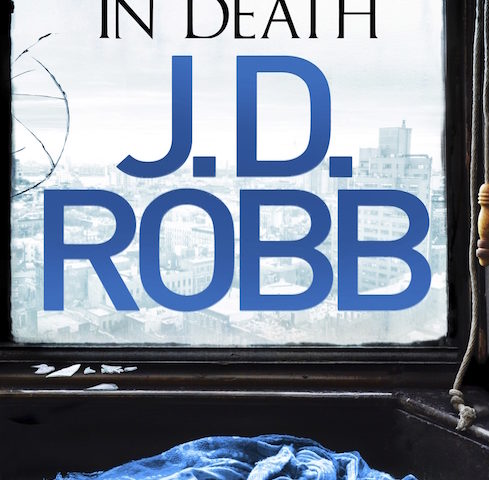 Review of: Apprentice In Death If you haven’t already become deeply immersed in J. D. Robb’s In Death series, straight up — this book probably isn’t for you. Yet.

Apprentice In Death is the eleventy-twelfth in the series, following Lt. Eve Dallas and multi-gazillionaire Roarke in a futuristic New York City. And in this particular instalment Dallas is hunting an LDSK (Long Distance Serial Killer) who is terrorising the city. Or, as the title suggests, a pair of killers: a trainer and an apprentice.

Look, the series is billed as futuristic crime, but Robb [ F | W ] is the pseudonym of Nora Roberts [ F | W ], so it still hits a significant number of romance genre marks along the way, and in all honesty that’s what I’m reading for. I mean, Roarke is the most Romance Hero romance hero to ever romance heroically. He has ‘an absurdly beautiful face set off with wild blue eyes of some Irish god, and the perfect poets mouth’. Pair that with total badass, and initially emotionally stunted Eve Dallas, and it’s basically Slave to Sensation [ review ] except they solve crime and there aren’t any animal changelings.

However, the relationship beat in Apprentice In Death is much more subtle than usual. Eve and Roarke are redecorating their home. Ok, stick with me here. I know it doesn’t sound like much at all, but it is actually kind of huge. Consider the fight it took for Eve to agree to first move in with Roarke. Consider how long it took her to call it their home, not just his home. Consider that the only area in the whole place that has any mark of Eve’s personality is her office, which is literally a replica of her old studio apartment, from before she met Roarke. So basically, despite being married and that they’ve ‘cohabitated’ for years, their personal space has never reflected the fact that they’re together. That they’re redecorating is just one more way in which they’re continuing to grow together. And honestly, it’s really satisfying to see how far Eve and Roarke have come from their combative meeting in Naked In Death [ BT | Amz | iT ].

Along with this, of course, there are also certain moments I’ve come to expect from an In Death book: I know Eve will have a nightmare about the case; that Roarke will inexplicably be able to put his entire work life on hold and insinuate himself into Eve’s case; that Eve will ask for a consult with Mira only to kind of answer her own questions. These are some of the tropes Robb has crafted for her series, and because her writing and characterisation are always solid, you can relax into them and just enjoying catching up with all the crew.

If I wasn’t especially invested in the procedural crime side of things, that’s okay. Maybe I just wasn’t in the mood for a crime novel right now? Plus, I’d already untwisted a couple of threads of the plot well ahead of Dallas and her team, which probably also contributed to why I struggled to get invested. Then suddenly, everything picked up and I was reading as fast as I could to keep up with the action.

I won’t try and pretend you’ll be surprised by much, as far as the plot goes. You’re clever, and there are plenty of signposts to lead you to the correct conclusions. Besides, in many ways, Robb fans have been in this place before. And that’s another reason why I think new readers might struggle to fully appreciate Apprentice In Death. There are copious references to former cases, which occasionally serve as shorthand or even to underscore the decisions, motivations or concerns of Dallas and her team.

So where does all this leave us? Well, Apprentice In Death isn’t even close to becoming my favourite of the series. In fact, honestly I feel like it’s one of the more average instalments. But an average J. D. Robb is still a pretty great book. Which for me is what helps make every book in the series feel like a comfort read, no matter how new it is.

Content advisory: Reading this book may make you feel like doing a complete series re-read, and you really don’t have time for that my friend.