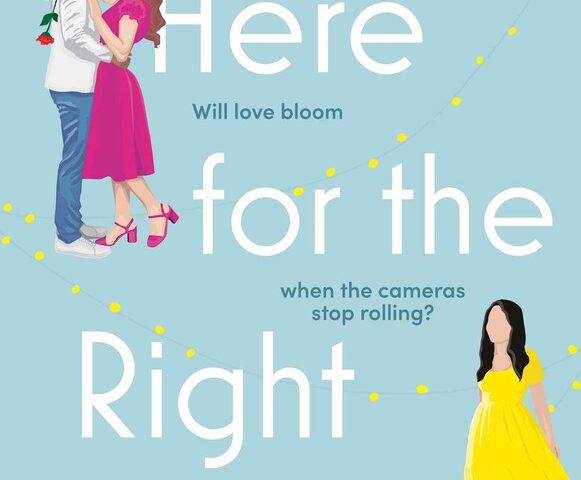 Review of: Here for the Right Reasons

An engaging romance in a fresh Aussie voice with a unique take on the reality dating show format that showcases Jodi McAlister's insight into the tropes and their limitations.

An engaging romance in a fresh Aussie voice with a unique take on the reality dating show format that showcases Jodi McAlister’s insight into the tropes and their limitations. Disclosure: Jodi McAlister recaps The Bachelor franchise for this blog. Decadence also considers Jodi a friend, and will be hosting a virtual book launch with Jodi live on Instagram, from 7pm AEST on Friday, July 8, as a representative of Galaxy Bookshop.

First of all, I’m surprised that it’s taken this long for Jodi McAlister [ T | F | IG | TT | W ] to give us a romance set in a dating reality show, but Here for the Right Reasons takes the deep dive into the background of reality TV dating that her followers expect.

Cece James and her friends drunkenly filled out casting applications for dating reality TV show Marry Me, Juliet and she forgets all about it until the studio invites her to audition as one of the Juliets competing for the heart of the Romeo. Before filming starts, she loses her job at the beginning of the pandemic and with very little in savings and no family to fall back on (growing up in the foster system taught her independence from an early age), she is desperate to generate some fast income. Who knows, she might even make it to the end and become an influencer and never have to worry about money again.

Things don’t go to plan when Cece is far from a natural in front of the camera and fails to even tell the season’s Romeo (aka the Bachelor, aka former Olympian Dylan Jayasinghe Mellor) her name, causing him to eliminate her on the first night. But with the set going into lockdown, Cece isn’t allowed to leave, and the studio must compensate her for her time. A sympathetic Dylan creates a role for Cece as a confidante, to help her gain confidence and reach an audience.

While Cece isn’t there for the right reasons, neither is Dylan. He’s an Olympic gold medallist who suffers from panic attacks and is hoping to use his platform as this season’s Romeo to raise awareness of his mental health charity and as the first POC in this lead role, he feels the weight of representation. He kind of reminds me of a grown up version of Cardy from Valentine, a really sweet guy who wants to help people and is very mindful of his community.

Just like contestants of The Circle USA use catfish hunting as a socially acceptable reason to get rid of someone they don’t like, contestants of Marry Me, Juliet and their ilk question each other’s motivations to discredit rivals, but McAlister adds a third dimension to stock characters like the ‘villain’ and the ‘wifey’. While it’s easy to dismiss a contestant as not being ‘there for the right reasons’, McAlister suggests that maybe their motives are more nuanced and her characters are layered enough that presenting them as anything other than desperate singles or jaded opportunists feels more natural than generous.

She’s also been really smart in taking the dirty street pie that is filming what is traditionally a glamourous fantasy of joyflights and sailing (say it with me: transportation is not a date), containing it within a quarantine bubble and mining it for the storytelling and romantic potential. Cece and Dylan didn’t immediately hit it off in the heavily scripted environment of reality dating, but lockdown and a touch of creativity sets up opportunities for them to get to know each other in their own bubble, separate from the pressures of producing content, and puts some reality into reality TV.

Here For the Right Reasons will appeal to romcom fans looking for a real connection against a manufactured fantasy cliché backdrop, and reality TV obsessives, who will pick up on the Easter eggs and subverted tropes through the book. The format of the show is pretty easy to follow whether you don’t see much past the headlines in your newsfeed or even if you’ve never watched an episode of The Bachelor in your life.

As much as Here For the Right Reasons explored the characters’ motivations as Cece and Dylan found their love story, I’m looking forward to seeing how McAlister handles the bold cheekiness and breaking of social conventions promised by book two’s title Can I Steal You For a Second? I’m just hoping we get to see the Couch of Wine and Intimate Conversation.

Shameless plug time: preorder Here For the Right Reasons from Galaxy Bookshop for your chance to win a $50 voucher. Members earn double reward points for purchasing this title in July.

Join @galaxybookshopsydney on Instagram from 7pm AEST on Friday, July 8, for a live chat with Jodi McAlister.
And Channel 10: just call her already!

You can find an extract of the book here. Published by Simon and Schuster.