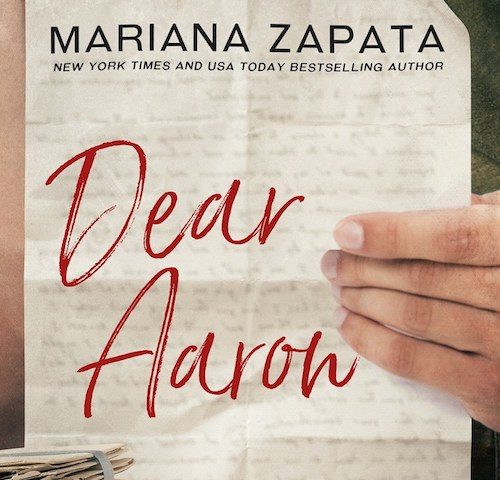 The story has sweet moments, but for the most part it's boring. There are similar but much better stories on Wattpad, and they’re free. ﻿The story has sweet moments, but for the most part it’s boring. There are similar but much better stories on Wattpad, and they’re free.

I’ve heard some very good things about Mariana Zapata, and she’s on my list of authors to try. When Kaetrin flagged to me that Dear Aaron has a half-Filipina heroine, I figured it would be the perfect excuse to finally read Zapata’s work.

Let me spare you the pain. If you’re keen to try Zapata’s work, don’t start with this one.

I was warned that Zapata specialises in slow-burn romances, so I was prepared for the romance to take a bit of time. But this isn’t what happens in Dear Aaron. There are chunks of this story that could have benefited from extensive developmental editing. The bones are there to tell a good story with these characters in their situations — Aaron in the military and unsure of what he wants from life, and Ruby trying to overcome her fears in order to embrace possibilities for the future — but it doesn’t feel like the structural work was done to do the characters justice, or to build a cohesive story arc.

The story starts with an email exchange. I’m not a huge fan of the epistolary style in romance because it’s very difficult to execute well. Ensuring that the heroine and hero have distinct voices is tricky, and it’s made trickier when they’re communicating via email, then via instant messages, and then finally in person. In my experience, authors underestimate how difficult it is to write emails into a story and the so-called emails rarely sound like actual emails.

My first warning that this book and I wouldn’t get along was when I realised that the heroine, Ruby Santos, is 23. Based on what I had read up to that point, I had mistakenly assumed that she was a teenager. Oops. She’s the kind of milquetoast heroine that works very well if you’re new to the genre and still in the honeymoon phase of devouring all the books as fast you can, but when you’ve been reading in the genre for decades, it’s just … frustrating. There was potential for Ruby to be more than a collection of tropes and romantic shortcuts, but Zapata never explores them.

Ruby is introverted, hates confrontation, and doesn’t like to take risks. She’s the perfect canvas for a great romance, but the stakes in Dear Aaron are never high enough to be interesting. Zapata relies on genre shortcuts — the smirk, if you like — in lieu of a coherent character arc. If you dislike heroines who burst into tears just so the hero can express tenderness, this isn’t the book for you. Don’t get me wrong: I love genre shortcuts, but they have to be reinforced by actual character development. I didn’t feel as though either character grew much at all.

Aaron is slightly older than Ruby, but again, my initial assumption was to imagine him in his early-20s. He still had that blokey kind of air about him, which — okay, I’m fine with that, and I actually do love a character arc that pushes the hero to find a sense of direction in life. Aaron has been in the military for a while, and Ruby starts emailing him as part of a penpal-type initiative. The beginning is kind of interesting, but it soon devolves into info dumping and minutiae.

Some of it feels downright careless. Take, for example, some of the events that are mentioned in Aaron and Ruby’s emails. Let me see if I can remember this, so you can all tick off your diversity bingo cards: POC background (although she has blue eyes, so whatevs), heart condition, cancer scare, autism, sexual harassment. Did I miss anything? And the thing is, this all would be fine — great even — if these nods to diversity actually went somewhere. Sadly, they did not.

Also, for reasons I never really understood, the story is set between 2008 and 2009.

Anyway, the writing picks up when Ruby and Aaron move from email to (online?) chat. Without the temptation to indulge in pointless character descriptions, Zapata’s writing becomes much more snappy and fun. I particularly love the toilet humour:

This book is redeemed by toilet humour. This entire exchange is hilarious. ? But legit question: who says rectum instead of a(r)se? pic.twitter.com/uKM8KLLxTa

Finally, it feels like the characters are actual people, and I can get a sense of that slow burn that Zapata is famous for. At around 35% on the Kindle, I felt the first fluttering of interest in the romance. And then … it kind of faded away in boredom. There’s something very uneven about the pace in this book that not even the glorious poo jokes can hide.

When the story takes us out of the epistolary style and into Ruby’s POV, I get a better handle on what other readers love about Zapata. There’s a lot of internal angst in Ruby’s POV. A lot. She’s in her head all the time, and because she doesn’t have friends, there’s no relief for me, the reader. (And that’s another thing: she’s 23 and she has no friends. She’s into cosplay and she has no friends. That is generally not a solitary hobby. I mean, it’s not impossible, but I find it very hard to believe. Then again, she’s super boring, so…) I kept hoping for dialogue because Zapata’s writing improves noticeably when people are talking to each other.

Ruby and Aaron fiiiinally meet up when Aaron flies her to Florida to spend a few days with him, his buddies, and a girlfriend and sister (of the buddies). Look, let’s not even go through how problematic that is. It’s romance. I’m happy to go with this plot. But omfg Ruby was TEDIOUS AF from the moment she arrives at the airport and can’t find Aaron.

Fortunately, Aaron becomes so much more appealing — maybe because we see him from Ruby’s POV, but probably because Zapata is forced to show us what he feels. He has expressions! He broods! He gets cranky and quiet and we all know it’s because he’s slightly jealous! I love this stuff, and what little there is of it is pretty good. Or maybe I was just grateful to have crumbs of feelings after enduring Ruby’s pointless angst. Whatever, I’ll take it.

But every time I try to sink into the story, something like this breaks the mood:

Like what does this bit even mean? So many wasted words, signifying nothing. pic.twitter.com/B3I0rztjG5

Finally, I get to the part about Filipino cuisine that motivated me to read this book in the first place. Ruby’s dad is Filipino, and while I love the fact that Zapata wrote a half-Filipina heroine, there’s nothing in the story that makes this relevant. The only time her Filipino background comes in handy is when she tells Aaron and his friends about some of the more confronting dishes that we eat. As I wrote on Twitter, this stuff doesn’t really bother me. I’ve had my fair share of telling squeamish friends about balut and isaw. But I can see why a Filipino reader would be upset that the only seeming reason to have a Filipina heroine is for this one not-exactly-complimentary scene.

And did I mention that Ruby has blue eyes? The fates would have to align pretty spectacularly for that to happen.

There’s also a bit where another character tells Ruby that she “can’t really tell you’re Filipino, except for the shape of your eyes”. Let me count the ways this is problematic: 1) the character who says this is also a POC character; b) RUBY HAS FUCKING BLUE EYES FFS; c) there is no eye shape that will distinguish you as a Filipino. I actually think that this is the part most likely to offend Filipino readers. But you know, we’re also just really hungry to see more of us in books, so it’s not going to be terrible for everyone.

Anyway, back to the romance, which is finally smouldering, except each time you think maybe it’s hot enough to make smores, it suddenly feels like I’m reading a teen romance again.

At 89% this happens. She has already told him she loves him. And yet still no pashing. This book is set in topsy-turvy world. pic.twitter.com/kroq10GUMp

Guys, he’s a 28-year old guy on leave from military service, hanging out with a girl who has already told him she likes him, and he still has NOT KISSED HER ON THE MOUTH. This is not a slow burn, you guys. This is terrible pacing and overindulgent I don’t even know what.

Look, I concede it’s possible they kissed and I missed it because I was so bored I was skimming fast. But I doubt it. And it’s so frustrating because Aaron is actually very charming when they start getting touchy-feely.

Okay, this is cute. I just wish he’d get on with it already. The heroine is so needy. pic.twitter.com/vUZUyq0zT2

And finally — at 96%!!! — these kids finally have sex. And it’s even kind of hot in a generic sort of way if I just skim past Ruby’s internal hand-wringing while it’s happening. But then…

So at 96% the sexy times begin. It’s not the best but okay, it’s passably hot. And then this happened and I question everything about this book again. WHAT DOES THIS EVEN MEAN??? #helprubyfindhervagina pic.twitter.com/gB9swu76MR

That line is horrible, and I read it over and over again to be sure that I was reading the words properly.

And then the book ended. And you know what? Ruby is still wringing her hands because even after the great sex, she’s already worrying about the end of the relationship. WITH ONLY AN EPILOGUE TO GO. I can’t even with this heroine.

By the time I finished the book, it felt like I had been trolled. So much waffle, so little build-up, such a paltry pay-off. The story had sweet moments, but for the most part it was boring. No, I don’t mean slow-paced or with a slow burn. I mean boring. There are similar but much better stories on Wattpad, and they’re free.