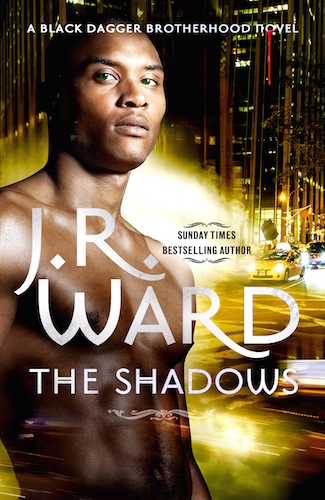 The Black Dagger Brotherhood is no longer a romance series, and Gabby is enraged. Warning: Major spoilers for The Shadows. And CAPS.

Today, I finished reading The Shadows by J. R. Ward.

Let me start off by saying I have a super complicated relationship with the BDB. Sometimes, I am so head over heels in love with it and other times, I’m two seconds away from throwing it at the wall. It’s enraging, messy, sexy, funny and truly unbelievable most of the time. (Vishous ends every single since sentence with “True?” Like, come on. Are you for real?) I was so into this series, I did my thesis on Lover at Last. But I guess that book was the beginning of the end.

As the series has progressed, something fucked up has happened, and it wasn’t until today that the final nail was slammed into the coffin. It’s no longer a romance series.

This probably started around Payne’s book (or maybe earlier, it’s hard to keep track). But the earlier novels in the series were firmly romance. Wrath, Rhage, Butch, Vishous, Zsadist, Phury. They all had proper romance novels. But the story started getting bigger and bigger, and there was less focus on the Brothers and their mates, and more on the ever expanding universe that is Caldwell. Along with the true enemies of the lessers (who, let’s face it, are the most boring part of the series) we now have sympaths, Shadows, Assail, the Bastards, Throe, etc. There’s also Paradise and Craeg (which is apparently leading to a spin-off series. Also, speaking of Paradise, why is her dad named Abalone??? Was there no other name that sounded fancy enough?? A seafood delicacy just does not cut it!). There is no main storyline. The book changes perspectives and scenes every single chapter. It’s INFURIATING.

I read romance for one reason — the overarching love story. I read the BDB because it’s cracktastic and it has usually delivered on this front. I didn’t bother finishing The King because I wasn’t interested in revisiting one of the least interesting pairings of the series (sorry, guys, but damn I am sick of Wrath and Beth). I also knew it wasn’t a romance. I took it as a brief sojourn down memory lane, exploring where the couples are up to and what they’re doing since the Warden is SUPER into telling us about their lives. I forgave it because she has a complex relationship with her characters (I admit, I do not understand this relationship, but hey, she gave me Rhage, so I don’t argue).

What I didn’t get was apparently The King was a sign. A premonition, if you will, of what was to come.

The Shadows follows the story of Trez and iAm, two ever-present characters in the earlier novels. We’re familiar with them. Apart from the fact that I still don’t know what a fucking Shadow is (they have special powers?? Like what?? “Shadowing”?? What does that MEAN?), I know that they have issues. Trez is in love with Selena and has a pretty severe sex addiction. He manages to cure himself pretty damn quickly thanks to Selena’s Magic Hoo Hoo (I think he was just pretty into having sex) and it’s weirdly never mentioned again. Anyway, the book does follow that love story but J. R. Ward did something that was really fucking messed up.

Please turn away here if you don’t want to be spoiled.

She killed the heroine of a fucking romance novel. Or what was meant to be a romance. She’s changed genres midway through the series, and I’m pissed that I’ve stayed with it for so long. The marketing hasn’t changed, the labelling hasn’t changed, the brand hasn’t changed. But the story has. I tried to read urban fantasy but couldn’t commit to the one character over multiple books. I’m greedy because I want immediate gratification, and romance usually gives it to me.

If I couldn’t see an alternative to Selena’s death or if I was totally convinced by it, I don’t think I’d be as annoyed. But fucking hell, look at what else she’s done to keep her heroes and heroines together.

Rhage and Mary got together because the Scribe Virgin cured Mary’s cancer and GAVE HER IMMORTALITY even after she made Rhage promise never to see her again?!

Vishous and Jane are still together even though JANE DIED AND IS NOW A GHOST?!

Butch and Marissa got together because apparently Butch has a SECRET VAMPIRE AS AN ANCESTOR AND WAS ABLE TO BE TRANSFORMED?!

I think it’s been proven time and again that J. R. Ward can defy the rules of her own universe. It’s big enough to do that. But she couldn’t do it for Trez because the characters wouldn’t let her? Her Rice Krispies told her something different?

It’s your book, your rules!

You write in a genre that demands a HEA. I know it’s been under debate recently, but it goes back to the promise of the text. Genre conventions are genre conventions and the definition of a fucking romance novel includes a HEA. I’m not ready to say goodbye to that!

It feels like we’re being messed around with. Not only do we have to pay insane prices for her ebooks ($16 anyone?! I barely pay that for a paperback! And as Kat has noted people overseas were paying $85 for virtually signed copies) but she decided to warn us the day of the release? The Goodreads blog that she wrote was upsetting for several reasons. Ward decided to blame the whole thing on her creative process, but she was hiding behind so many spoiler tags that I wouldn’t have read it before the actual book anyway! Forgive me for liking anticipation in my novels! I’m pissed that she finds the HEAs boring, and the Chosen without personalities. She’s set us up with this universe and then is bored with it before she carries through on the promises she’s making. In the post, she acknowledges that people were angry when Wellsie was killed off. I remember that but this is a BILLION times worse. Wellsie was a secondary character. She wasn’t the main focus of a novel.

Granted, there was a lot of flip-flopping between stories in this book, but I still read it as though Trez and Selena were the thread holding it all together. Maybe I was forcing it because that’s what I expect of romance but she did nothing to change my perspective. The only thing that hinted at things not working were the page numbers. I inched my way through the book, page by page. 200 pages — still so much time left. 300 pages — wow, they’re moving fast. Can’t believe they’ve said I love you already. 600 pages — so a cure better come soon, they’re running out of time.

They fucking burned her body, and I was still unconvinced. Heroines have been brought back from the dead before, why would this be any different?

I didn’t believe it. It felt like she was just trying to mix things up, but romance can’t function that way unless you tell your readers things are going to change. Tell them before the release date.

If you want to argue the case that there was still a HEA in this book, then fine. But I’m not going to buy it. iAm met maichen halfway through the book. He barely spent three scenes with her, then BAM, everything’s resolved and we’re deeply in love. If Ward had seen fit to grant us with a li’l more of them, maybe this book wouldn’t have been the massive disappointment it turned out to be.

The series is changing, and I don’t like where it’s going. The thing I hate the most is the fact that I still won’t stop reading it. I know. I’m ill! Why complain about something I have the power to end? It’s because I loved the feeling I got when I read Lover Eternal. I loved the way the characters functioned. I loved that Rhage was blindly following Mary in the hallway. It was her voice. Her scent that did him over. I loved that I fell in love with Qhuinn and Blay before I read their book. I loved that I could watch them go from friends to lovers so beautifully.

I know the series is messed up. I know the race issues in it should make me walk away. But it makes me want to look at it critically and ask why Ward refuses to see colour and race but gives them such deliberate cultural signifiers. I want to know why masculinity is so uncompromising at times, but sometimes is so fluid and soft that the heroes are crying more than the heroines. I want to know why her female characters don’t feel as alive as the Brothers, and why she isn’t comfortable writing women. I want to keep talking about this series because it’s important.

But it’s going to be a challenge to go back when she’s broken a rule that, to me, should be pretty damn unbreakable.

If you just read this and wondered what Gabby was talking about, you can catch up by reading the BDB cheat sheets.