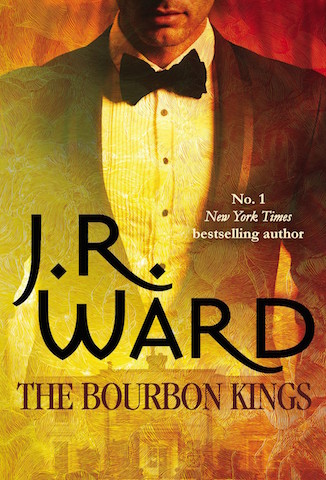 An unwieldy mess, that tries too hard to be too many different things at once, and never quite succeeds at any of them. If you must read it, try and buy it in print. It might be expensive, but it’s cheaper than replacing your e-reader after you throw it against a wall.

An advance reading copy of this book was generously provided by Hachette Australia. You can read an extract here.

I’ve been ruminating on this review for a while now, but strangely it’s been kind of a difficult one for me to write. Not because I didn’t know how I felt about J. R. Ward aka The Ward’s latest novel (I definitely have feelings and thoughts and more feelings). No. My problem, incidentally, can be summed up by paraphrasing a line from the book itself: I want to hate it but it lacked the necessary depth for such an emotion.

If you’re unfamiliar with J. R. Ward, I’m not too sure where you’ve been for the past ten years. Made famous by her vhampyre serhies Black Dagger Brotherhood, readers of The Ward have come to know her for writing violently homoerotic paranormal trash fic. And really, that’s what I was hoping for from The Bourbon Kings. Minus the paranormal elements. Probably.

What I got was an awkwardly paced, and overly long, family saga featuring a smorgasbord of characters I struggled to keep track of (let alone actually care about). In actual fact, I kept a running family tree so I could remember who everyone was and how they connected to each other. The book was that bogged down with parallel stories and side stories and flashbacks and really just so much stuff.

Set on the Bradford Family Estate in Charlemont, Kentucky, The Bourbon Kings revolves around the Bradford family, who made their money in bourbon. The current Bradfords are headed by patriarch William Baldwine, who married into the Bradford family and now rules with an iron fist.

In addition to William, the Bradford-Baldwine family includes his catatonic wife and four adult children. Edward, the eldest, is suffering from various physical and mental ramifications after being kidnapped and ransomed (off the page); Lane, the hero, is a heartbroken playboy, but more on that later; Virginia, or Gin for short, is the youngest of the Bradford-Baldwine siblings. Before I get into Gin’s deal, let’s take a second to appreciate that the daughter of a bourbon distillery mogul is called Gin. Anyway, she has a teenage daughter she barely interacts with, and is quite content to live off her family’s money; and finally, there’s Max, who seems to have quit the family altogether, and only ever appears in flashbacks of their childhood.

In the interest of fairness, I should point out that Ward herself was very clear that The Bourbon Kings is a saga, not a romance, so I’m probably at least partly to blame for my antipathy regarding roughly 35% of the book. But even after realising I was in for a much more straight (in every possibly way) kind of story I was still underwhelmed for four reasons.

1. I could not have cared less about the hero and heroine if I tried

Lizzie King is the head gardener at Easterly, and three years ago, was swept off her feet by Lane Baldwine. But then Lane finds out he’s about to become a father to someone else, and Lizzie immediately breaks up with him without any further discussion or screaming matches or just … anything. It’s basically the dumbest break-up in the world, and if Lizzie had bothered to speak to Lane like the adult she was (THEY WERE BOTH 27-ISH YEARS OLD AT THE TIME OF THE BREAK UP! I’M 27-ISH AND I KNOW YOU NEED TO TALK TO THE PERSON YOU’RE DATING WHEN YOU THINK THEY’VE FUCKED UP SUPER BADLY!) she would have realised there was no reason for them to break up because Lane’s babymama was his ex, who he hadn’t seen since before he started dating Lizzie. Therefore, he didn’t cheat on her, which seemed to be her only reason for dumping him.

Similarly, Lane’s reaction to being dumped is the single most moronic solution to a shitty situation I’ve ever read. He marries the babymama, Chantal, then immediately moves to New York City and starts sleeping on his university friend’s couch.*

When Lane does return to Easterly for non-Lizzie or babymama related reasons, he continues to not explain himself, and she continues to not ask for explanations. Instead, they both just sort of circle each other and think about how much chemistry they have but are too intelligent to act on, while outwardly displaying no chemistry or intelligence.

And these are the two spineless morons I’m supposed to be rooting for? No.

* I feel like I need to take another moment to dissect this. Lane is an incredibly rich dude, but when he runs away from his problems he ends up sleeping on the couch (not in a spare room, the actual couch) of his equally rich-dude friend. And he continues to sleep on the couch and not disclose ANY of the reasons why he ran away to HIS FRIEND WHO TOOK HIM IN FROM OUT IN THE COLD for the ENTIRE THREE YEARS he stays away from Easterly.

2. The representation of non-white characters in this book was questionable at best

Ward is no stranger to criticism when it comes to her representation of non-white characters, so the fact that she set this book on an estate in Kentucky meant things were probably always gonna be a little dicey.

And then Miss Aurora was introduced to the story. Miss Aurora is an African-American woman who works in the kitchen at Easterly and appears to be Lane’s main source of maternal affection, which is fine. Except there were times where she read more like a mammy caricature than an actual character. Like when you learn that, despite having many nieces and nephews she clearly cares about, the only pictures Miss Aurora has on the walls of her home are of the kids from the white family she works for? Yeah. I’m sure.

I desperately want to give Ward the benefit of the doubt here, but I also know that as someone who looks for books — is hungry for books — that do diversity well, I can’t bring myself to ignore how this character was handled.

Ward has very distinct idiosyncrasies in her writing, and people tend to either love or hate them. Personally, I’m not a fan of the way she name-drops or uses slang — whether it’s Lizzie using Gordon Ramsey’s name as a verb while walking through the kitchen at Easterly, or Lane describing the way his sister waves as ‘giving a toodle-loo’, it’s cringe-worthy. I also can’t help but think about how these references will sit in ten years’ time. Gordon Ramsey might be all-pervasive at the moment, but ten years ago so was Hilary Duff.

It’s very clear that Lane’s three siblings are each being set up to become a main protagonist in their own right, with Ward building intrigue around them to varying degrees and success. Which brings me to Gin. She’s a pretty prickly character — she’s spoilt and she’s petty and she has emotional barricades like whoa and damn. She also is pretty promiscuous and isn’t shy about manipulating men through sex. Which, compared to her spineless, idiotic brother, made her pretty fascinating to me. She also appeared to be going through a pretty intense character arc, which again, fascinated me.

And then she is raped by her fiance-of-convenience (it’s a whole thing I can’t even begin to get into because it makes me so mad) almost immediately after she agrees to marry him. It’s pretty abhorrent, and very jarring, from the way Gin reacts to what’s happened to her, to the way other characters INCLUDING her brother, the supposed hero, interact with her immediately afterwards. It also seemed very much like Ward was using rape as a device to make me feel sympathetic to an arguably unlikeable character. And frankly this is a trope I’d be very happy to see disappear from fiction (let alone romance) altogether.

I wouldn’t recommend this book, unless you’re really into hate-reading, wish all your books were more like soap-operas, or are just a die hard fan of J.R Ward. Either way, I strongly recommend you pair this book with at least one glass of bourbon.