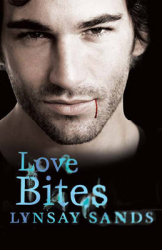 This guest review is courtesy of Buttercup, a self-confessed Lynsay Sands fan.

The story begins rather bleakly in a morgue where our hero, Etienne Argeneau, is lying on a metal table about to be examined by our heroine, coroner Rachel Garrett. She is feeling a little puzzled at her attraction for the good looking, but dead, guy. She feels even more puzzled when the corpse starts talking to her.

Etienne is not in fact dead—he is a vampire with a bullet in his chest. Unfortunately for Rachel, whoever killed Etienne follows him to the morgue and she is caught in the crossfire, and is mortally wounded. Etienne wakes up just in time and saves Rachel from death by biting her. This turns out to be a great sacrifice on Etienne’s part as vampires are bound by law to turn only one human in his lifetime, an honour usually reserved for a possible mate. He brings Rachel home and takes care of her while she is transitioning, and takes a softly, slowly approach in introducing Rachel to the world of vampires. Sometimes with hilarious results…

Rachel was already famished to the point that he was looking like a tasty treat, and if the cold made her need blood more urgently…

“What the hell happened to the two of you?” Bastien asked with alarm as he got close enough to see Etienne prostrate beside her. Then his gazed found his brother’s body and his eyebrows flew up. “Oh. Oh, dear. You bit him, huh?”

The plot mainly revolves around Rachel’s turning, the help Etienne lends her, and the (in)action they take towards catching the would-be murderer. For the better half of the book, Rachel is confused and in denial about being a vampire. It’s an honest enough reaction were one to suddenly wake up to be told that one’s Bloody Mary is an actual BLOODY Mary. The loneliness that she feels in the beginning of the book is soon chipped away by Etienne. Fortunately, Rachel is not a spineless wallflower so you don’t get irritated when she falls for a pretty, but ‘soulless demon’, face.

Our pretty-faced hero is entirely likeable and charming, although a little goofy, too. Perhaps we are so used to our vampires being cocky and take-charge that it is a surprise when he feels unsure, and you feel like saying to him, ‘Man up, dude!’ But then, not every vampire can be a kick-arse warrior, and although it seems like forever before he takes action, he does get to rescue our princess in the end.

The air sizzles with passion right from the beginning between the two lead characters. While Sands did not display any subtlety in establishing this (that is, sex in the form of a dream, sex on the beach, and sex in other places), I felt that their attraction to each other was entirely believable. The repartee between them is amusing and you understand the pull Etienne feels towards Rachel is not wholly borne of desperation for a life mate.

Lynsay Sands demonstrates that vampires needn’t be serious and full of angst all the time. The characters are fun and the world building complete enough that you aren’t left questioning where vampires originate and whether you should grab the garlic. The secondary characters lend the story substantial support, but not too much so that it distracts from the story that is currently being told—just enough so that you are eager to get the inevitable next book.

Time for the truth—I read the second book in the series, Single White Vampire, before I read this and was hooked on Lynsay Sands. So, I may be a little biased when I say this is definitely a keeper. That aside, if you’re looking for a non-overwrought, fun vampire story, this is a great book for you.

A review copy of this book was generously provided by Hachette Australia. Love Bites was the first book published in the Argeneau Vampire series in 2004. However, A Quick Bite was subsequently published and precedes this book in the series.